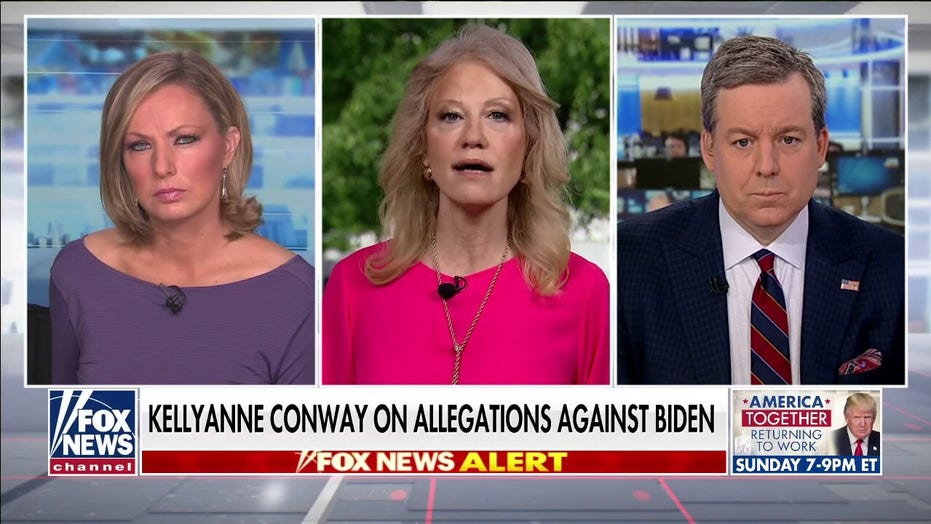 Senior White House adviser Kellyanne Conway declined to address sexual misconduct allegations against President Trump after she claimed it was "pro-woman" to "believe all women."

Instead, Conway said that addressing the allegations -- which have totaled more than 20 -- would distract from Tara Reade's accusation against former Vice President Joe Biden.

"We've answered those," she told another reporter. "But if you do that, then you're going to hear a lot from Tara Reade and other people." She added that Trump knew "a lot" about false allegations.

Conway had suggested that Democrats' "believe all women" mantra should apply to Reade as well.

“I’m going to continue to repeat what I heard from many people right left and center but particularly left of the political spectrum over the last few years, and they're three magic words. Believe all women," Conway said.

Conway added that she didn't hear any exceptions to that slogan, including whether or not they attacked someone aligned with President Trump.

"You're not pro-woman because you're pro-abortion. You're pro-woman if you say, 'I believe all women and I'll be here for them,'" she said.

Conway said that it was incredibly difficult for women to come forward and she didn't want to be "complicit in silencing and shaming a whole new generation of women ... who may want to come forward becauase a man in power, Joe Biden, has said, 'End of story. It didn't happen.'"

She later said: "We've got a lot to dig into, but most of all, 'believe all women' and saying to women, 'We don't want to silence or stigmatize you, you should come forward if you've got something to say,' that has to be consistent here. We can't just lose sight of that because the person who's being accused of these allegations ... is a quote powerful man who women are telling us he's for women because he's for abortion. If you're for women, prove it, and let's hear from her."

It's unclear what exactly Conway meant by "complicit" insofar as she doesn't work for Biden. But Conway did manage President Trump's 2016 campaign as he faced multiple allegations of sexual assault. Her tenure, which began in July of 2016, included Trump calling all of his accusers "liars" and threatening to sue them -- something he never ended up doing. "All of these liars will be sued after the election is over," he said at the time.

In a speech from October of 2016, he suggested that one of his accusers was too ugly to assault, saying: "Look at her. Look at her words. I don't think so." He also argued that the "vicious claims" against him were "preposterous, ludicrous, and defy truth, common sense, and logic."

On Friday, Conway also admonished questions about why Reade was coming forward so many years after the alleged assault in 1993. "I'm going to keep saying Tara Reade's name as a way to try to help a lot of women who may be watching -- that they have rights -- very hard to come forward, very hard to not feel like you did something wrong ... a lot of these women just want it to go away, want to forget about it. And when everybody's speculating why come forward now," she said, apparently gesturing towards the reporters. "There's only one person who can answer that and it's not me, it's Tara Reade."

Under Conway's leadership, the Trump campaign questioned why Trump's accusers took so long to voice their accusations. Former senior Trump adviser AJ Delgado told MSNBC host Chris Hayes that if the alleged conduct actually happened, "any reasonable woman would have come forward and said something at the time.”