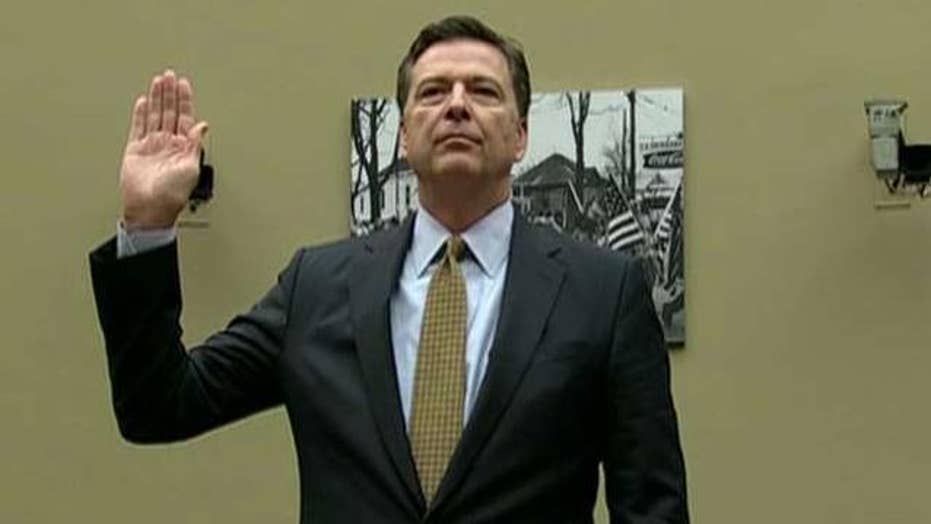 The New York Times reports prosecutors are scrutinizing at least two news articles about the FBI and James Comey from 2017; reaction on 'The Five.'

"The Five" co-host Juan Williams called Attorney General William Barr "thuggish" Friday and accused him and the Trump administration of targeting former FBI director James Comey in the wake of a report that Comey is being investigated for allegedly leaking information while heading the FBI.

"This is about Bill Barr... he has become President Trump's thuggish attorney general," Williams said on "The Five" Friday.

Williams said he initially thought Barr was "highly credible" but claimed Barr and the Trump administration are "looking to get Jim Comey."

Co-host Jesse Watters called Barr "a straight shooter" before returning the focus of the segment to Comey, who Watters said was "duped" by "fake Russian news."

The New York Times reported late Thursday that the Justice Department is investigating whether Comey illegally leaked secret information concerning a Russian document to the Times and The Washington Post,

The review, which the Times downplayed as a possibly politically motivated probe, reportedly concerned a Russian intelligence document "claiming a tacit understanding between the Clinton campaign and the [Obama] Justice Department over the inquiry into whether she [Clinton] intentionally revealed classified information through her use of a private email server," as the Post described it in May 2017.

Watters said the report justifies President Trump's firing of Comey in May 2017.

"And if you look back on what happened, Trump was right. Comey was wrong," Watters said. There was no collusion. So he had every reason to fire James Comey."