Late Sunday, the New York Times walked back an explosive report about a resurfaced allegation of sexual assault by Kavanaugh from his Yale college days.

The Times piece by Robin Pogrebin and Kate Kelly, adapted from their forthcoming book, alleged there was corroboration of an incident in which Kavanaugh, during the 1983-84 school year, exposed himself to a female classmate at a party. News of the supposed "bombshell" prompted calls from numerous 2020 Democratic candidates to impeach Kavanaugh.

In a major revision late Sunday, a Times editors' note added a significant detail — that several friends of the alleged victim said she did not recall the purported sexual assault in question at all. The Times also stated for the first time that the alleged victim had refused to be interviewed and has made no comment about the episode. 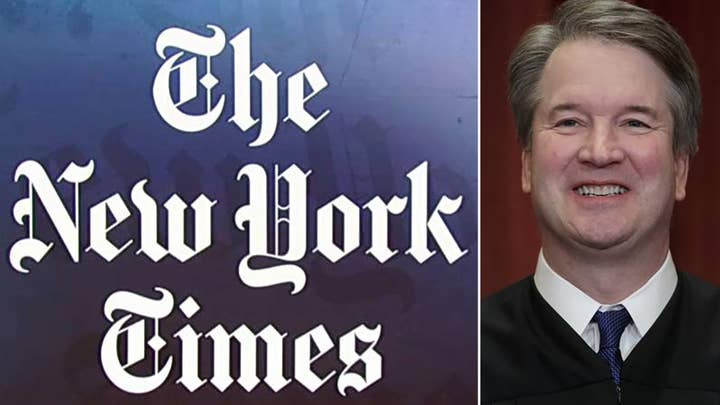 The only firsthand statement concerning the supposed attack in the original piece, which was published on Saturday, came from a Clinton-connected lawyer, Max Stier, who claimed to have witnessed it.

The Times' revision says: "Editors' Note: An earlier version of this article, which was adapted from a forthcoming book, did not include one element of the book's account regarding an assertion by a Yale classmate that friends of Brett Kavanaugh pushed his penis into the hand of a female student at a drunken dorm party. The book reports that the female student declined to be interviewed and friends say that she does not recall the incident. That information has been added to the article."

“There were Mollie Hemingway and others on Twitter saying that, in fact, she had no recollection of this happening and her friends were saying the same thing," he noted to AP White House reporter Jonathan Lemire.

"I could not believe The New York Times would write this piece without that information contained in it. Are you surprised 24 hours ... went by before they clarified that fact?”

He also hit the Times for failing to note that Stier was the opposing counsel of Kavanaugh in the Monica Lewinsky case.

"I just don't understand why they didn't put this information in the article."