Supreme Court Justice Clarence Thomas revealed what he really thought about then-Senator Joe Biden and the other members of the Senate Judiciary Committee during his contentious 1991 confirmation hearings, in a new documentary premiering in select theaters on Friday, Jan. 31.

"One of the things you do in hearings is you have to sit there and look attentively at people [who] you know have no idea what they are talking about," said Thomas in a clip of "Created Equal: Clarence Thomas in His Own Words."

The film's producers, Michael Pack and Gina Cappo Pack, interviewed the justice and his wife, Virginia Thomas, for more than 30 hours about their lives, his legacy and the hearings that nearly derailed his nomination and indelibly marked his public reputation.

On "Fox and Friends" on Monday, Pack said that Thomas understood that Biden was trying to trip him up -- however clumsily.

"I understood what he was trying to do," continued Thomas in the film. "I didn't really appreciate it."

"Natural law was nothing more than a way of tricking me into talking about abortion," Thomas continued. 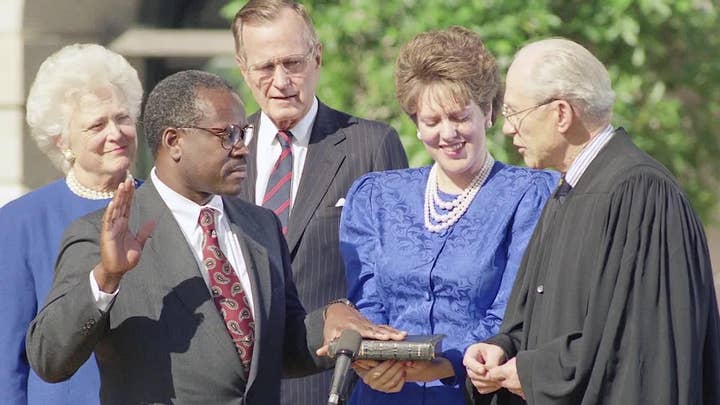 "He hoped to trick him into saying something about natural law that would imply what he thought about abortion and they would use that to block his confirmation," continued Pack. "And when that didn't work it was only later that they tried the Anita Hill revelations."

In a Jan. 24 Washington Post opinion piece, "This may be Joe Biden's worst nightmare," columnist Kathleen Parker reviewed the documentary and wrote that "Biden was hyperfocused on how Thomas might apply natural law to his judicial decisions... but Biden pursued a course so cryptic that one wonders whether Biden himself knew what he was driving at."

"That was all designed to trip him up, to have him say something that they can twist or use against him," Mark Paoletta, former assistant White House counsel to President George H.W. Bush, told Fox Nation. Paoletta is a veteran of Supreme Court confirmations, having helped guide Thomas and Justices Neil Gorsuch and Brett Kavanaugh through their hearings.

"It didn't appear that Thomas was gonna be in much trouble," recalled Fox News senior political analyst Brit Hume, reflecting on the conclusion of the Senate Judiciary Committees' questioning. "He knew not to say too much and didn't."

But then, a startling new allegation exploded into public view. Anita Hill, a law professor and former employee at the Equal Employment Opportunity Commission, accused him of sexual harassment when they worked together. Thomas vigorously denied the allegations.

According to Thomas, the entire effort to sink his nomination had everything to do with what he represented and not what he allegedly did or thought.

"We know exactly what's going on here," said Thomas in the new documentary. "This is the wrong black guy. He has to be destroyed."