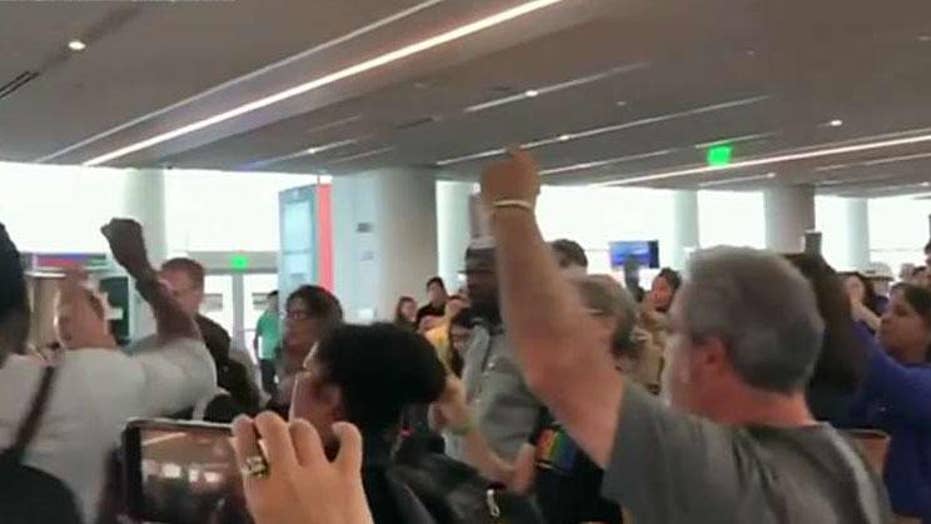 a Texas senator appears unfazed, taking a photo with supporter as a group chants, 'Free the children'; reaction and analysis on 'The Five.'

"The Five's" Juan Williams and Jesse Watters battled Tuesday over the situation on the southern border.

While discussing protesters confronting Sen. Ted Cruz, R-Texas, Watters on Tuesday brought up a recent confrontation on a New York City subway where someone showed the "Watters' World" host a picture of a dead migrant father and daughter on their phone to evoke a reaction.

"He shoves it in my face and he goes, 'Don't you care about this?'  Of course I care," Watters said. "This is emotional blackmail, what the left does.  They put something out there and they say, 'You don't care about kids and you support death.'"

Watters then argued that Republicans were the only ones offering "compassionate ideas" and solutions for the U.S.-Mexico border and that Democrats had done nothing.

Williams made a critical remark toward Republicans on the issue beforehand, prompting a back-and-forth between the co-hosts over child separation.

"I think people want borders with some compassion," Williams said.

"There's nothing cruel about what's going on," Watters said.

"Oh no -- separating children from parents," Williams shot back.

"You don't know if they're actually their parent!" Watters responded before the men began to talk over each other.

Watters and Williams continued to argue, with Williams saying that the president was discouraging asylum and Watters arguing that Democrats are supporting human trafficking.