White House senior adviser Jared Kushner celebrated Israel's new agreement with the United Arab Emirates and Bahrain following a signing ceremony at the White House on Tuesday, telling Fox News that the deals brokered by President Trump "makes you realize that anything is possible if we have the courage and the vision and the determination to try to move forward."

"You see this deal which, again, really is a watershed moment and just for me personally was an honor to be a part of it and very emotional day here at the White House watching, you know, something happen that nobody thought would be possible," Kushner told "The Story."

Kushner said the deal was the result of Trump's unique approach to diplomacy in the region and pointed to steps taken by the administration that helped establish trust leading up to this moment.

"We studied everything that had been tried and that had failed. He [Trump] said 'let's try do it differently,'" Kushner recalled.

"Instead of trying to take on the Israeli Palestinian conflict and making that the panacea of everything, we took the steps that needed to be taken to show there was real sincerity but we showed that the Palestinian leadership is not interested in making a peace deal at this time and we showed that Israel was.

"That, along with the efforts to bring everyone closer together allowed for us to make these historic breakthroughs." 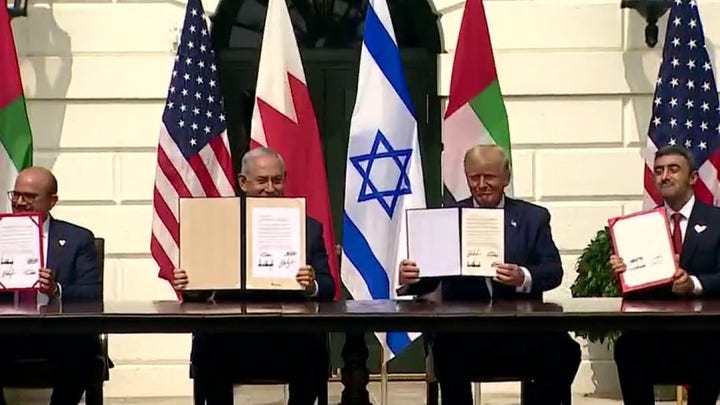 Ultimately, Kushner said, countries in the Middle East really just want the same thing, which is a promising future.

"People in the Middle East are now seeing that they don't want to have their futures be held back by conflicts of the past," he explained. "People want to pursue shared opportunities. They want to have better jobs. They want to do business together. They want to explore each other's countries and get to know each other, and President Trump was able to take an unconventional approach to bring people together."

Kushner addressed his critics who erroneously predicted that Trump's unconventional diplomatic approach would further contribute to instability in the region.

"These people have been saying 'if President Trump was elected he would start World War III.' What we saw today [was] instead of World War III, he achieved the first breakthrough in Middle East peace in the last 26 years," Kushner asserted.

"Their way didn't work. And so President Trump took a different way but he achieved a different result by doing it in a much more productive way."

Asked about the possibility of reaching a peace deal with Iran, Kushner said: "All these leaders getting together signing a peace agreement...it makes you realize that anything is possible."

"So," he continued, "the hope that we have is that Iran will stop their opposition to progress...they should be modernizing their society. Giving their citizens more rights and freedoms and helping build a brighter future for their generation...and we can help them do that."