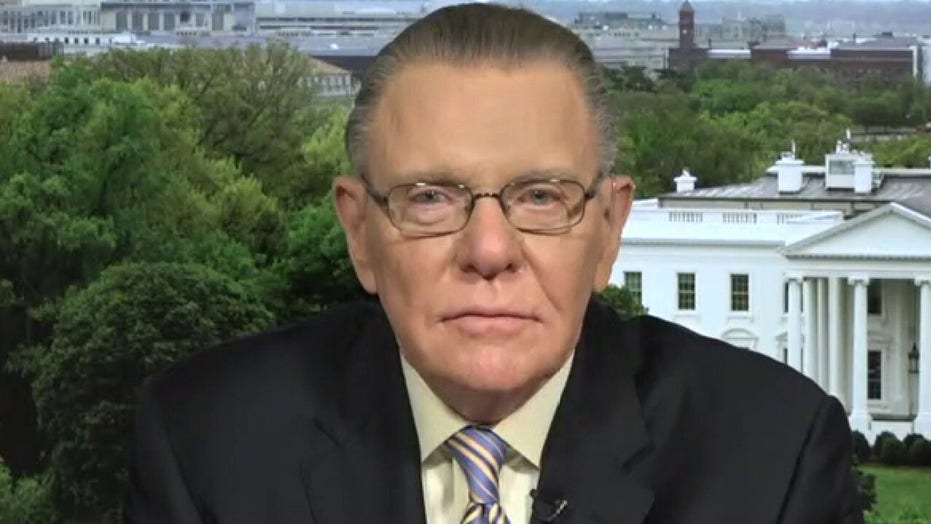 Gen. Jack Keane on the interception of Russian bombers near Alaska; tension with Iran and China

Retired Army Gen. Jack Keane appeared on "America's News HQ" Saturday and commented on the Russian nuclear-capable bombers that were intercepted and escorted by U.S. fighter jets during a flight over neutral waters near Alaska, saying Moscow was testing U.S. defenses as the nation deals with the coronavirus and racial unrest.

"When it comes to Russia, Iran and China, I mean, they are our adversaries. What's interesting about them, despite the fact that Russia and Iran have not been able to control COVID yet, they still take an adversarial position dealing with the United States and our allies," Keane told co-anchor Eric Shawn.

"With Russia, you know, they routinely test our defenses. And that's what those bombers were up to in Alaska. And we did intercept them. But they also love the media attention that happens as a result of it, Eric, particularly [Russian President Vladimir] Putin. And he likes it because he's able to demonstrate that Russia is really a world power [that] can stand up to the [...] United States."

Keane pointed out that Russia's actions are routine and the U.S. will often do the same thing.

"And that's a lot of what's going on with Russia. By the way, they flew over a Navy ship in the Mediterranean and a submarine also in the Bering Sea," Keane said. "And we flew a couple of bombers into the Black Sea, which Russia intercepted. And we will likely [be] doing the very same thing they were doing. We were testing their defenses."

Keane also commented on China's recent actions, saying the U.S. is pushing back.

"They really haven't let up, one, at all, despite the fact that we had an aircraft carrier come down with COVID. We're at sea, we're operational, and we're pushing back on the aggressiveness and malign behavior that China is imposing from Japan to Malaysia and from Australia to India," Keane said. "They are very aggressive and, you know, they have decided to take control of Hong Kong. They've issued legislation, a new national security law, overriding the local governance."

"They've had enough of those pro-democracy demonstrations and they are changing the autonomy of Hong Kong. And they're comfortable, if the world financial hub of the Asia Pacific region, which Hong Kong represents, goes away," Keane added. "They are OK with that as well. That's how serious they are in pushing back on the freedoms that exist in Hong Kong."