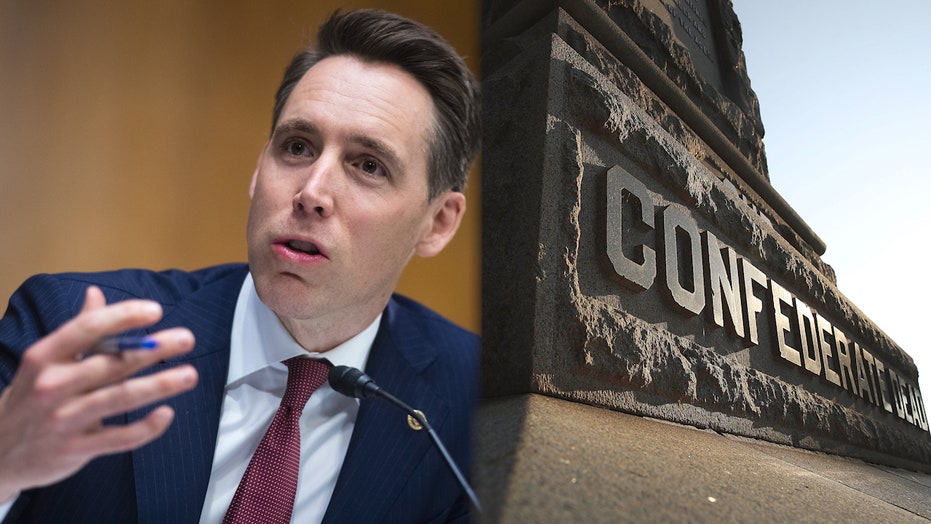 Sen. Hawley blasts Democrats' proposal to rename Confederate-named bases, says 'They're trying to use this to stir up a culture war'

Sen. Josh Hawley, R-Mo., is planning on introducing an amendment to the National Defense Authorization Act (NDAA) that would commit to holding a review and recommendation process over renaming military bases that are currently named in honor of former Confederate leaders.

Sen. Josh Hawley, R-Mo., is planning on introducing an amendment to the National Defense Authorization Act (NDAA) that would commit to holding a review and recommendation process over renaming military bases that currently honor former Confederate leaders.

The proposal would work to counteract a separate amendment offered by Sen. Elizabeth Warren, D-Mass., that would require the Department of Defense to remove the names of Confederate generals on all posts, assets, aircraft, streets, ships, etc., within three years. Warren's idea passed by voice vote out of the Senate Armed Sevices Committee last week.

"The problem with Senator Warren's proposal is that it is mandatory. It says the bases will be renamed. It just skips all of the process. It says, you know, we're not going to talk to people. We're going to do it behind closed doors. We're just going to sweep it away," said Hawley.

Renaming the bases has widespread support among Republicans and top brass at the Defense Department but that momentum stopped short of President Trump, who vehemently opposes any such move.

The issue is expected to be hotly debated as deliberations continue on the NDAA, a yearly package of bills dealing with defense budgets and expenditures.

President Trump could decide to veto the legislation if it were to pass with the renaming amendment language.

Hawley favors a review process that is more transparent, but also slower -- one that would include adding in public comments from stakeholders and hearings on the issue.

"You talk to the people who are affected. You talk to military families and to veterans and to the local communities, and you do that in public," Hawley said. "So my amendment will propose just that -- you have a series of public hearings and you actually have a real process here and then that there's a report that comes back and makes some recommendations. That's the way you would want to proceed if you're serious."

Confederate monuments and memorials have been coming down all over the country in the wake of police killings of unarmed black men. They’re seen as a relic of a bygone era, commemorating those who wanted to uphold the institution of slavery.

The issue is abuzz around the halls of the Capitol.

Sen. John Kennedy, R-La., had another idea to refute Warren's amendment, which, he says, "picks on the South unfairly." He proposes an amendment to rename every military installation as a medal of honor winner.

"We have 3,500 medal of honors winners. … I think to be fair about it we should address every military installation," Kennedy said.

This week, Speaker of the House Nancy Pelosi, D-Calif., said she would be ordering the removal of portraits of former U.S. House speakers who fought against the Union in the Confederacy.

"There is no room in these hallowed halls for the bigotry. We must lead by example," Pelosi told reporters in a news conference Thursday.