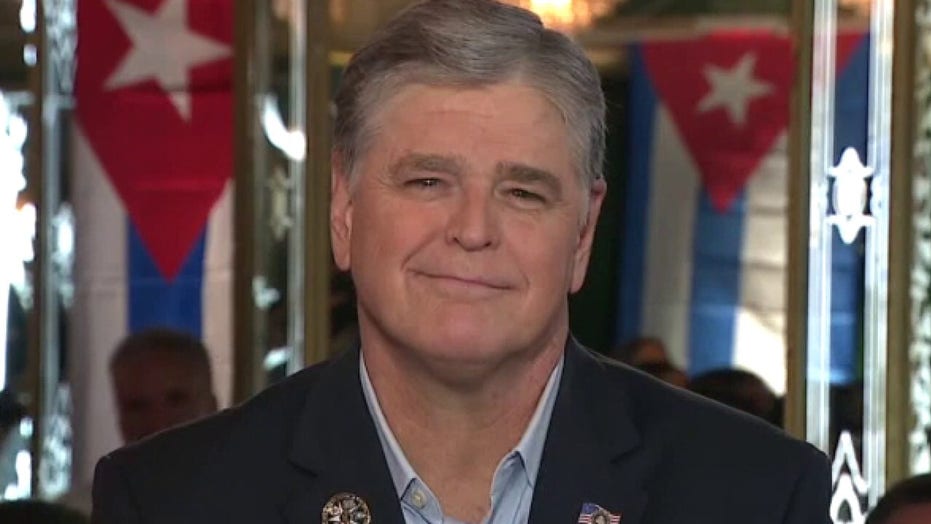 Hannity on Cuba's fight for freedom: 'they should be living in paradise'

Over the "last six decades," the Cuban people have been oppressed by a "selfish, power-hungry dictatorship" that has turned the island into a "communist hellhole," Sean Hannity argued on Wednesday's "Hannity."

The Fox News host showed support for the nation's fight for freedom during his live town hall in Miami, arguing the Cuban people should be "living in paradise" but instead have to circumvent the restrictions set forth by the authoritarian regime running the country.

"Only 330 miles south of where we're sitting right now with amazing weather, beautiful beaches, a rich culture, intelligent, hardworking, amazing people, the people of Cuba, they should be living in paradise," he said. "Instead, over the last five, six decades, we've had selfish, power-hungry dictatorship. They have turned the island into a communist hellhole."

Hannity continued by highlighting the 50 years that America has witnessed the Cuban people leaving the island in hopes of a better future for themselves and their families.

"The conditions are so bad that for over 50 years the Cuban people have been fleeing the island in droves," Hannity exclaimed.  "Perilous journey, broken down, dilapidated, rickety boat, shark-infested waters, risking their lives in makeshift rafts and inner tubes even, and literally anything that will float in the hope of making it to the shores of America and getting one foot on dry land."

Hannity cited the "dire" conditions of the country, the struggle with low-income, inability to find food and other basic necessities as reasons behind the countries' fight against "tyranny."

"Now, today, those still living in Cuba face these dire conditions. Many are risking their lives this very night," he said.

"Food is scarce. We have the Cuban people waiting in line for hours for a government allowance. Oh, you get five eggs a month per person and you get a few pounds of rice per month, along with two kilograms of meat every 10 days. Milk. It's only provided for pregnant women and children under seven. I'm not making any of this up. This is communism."

He went on to express solidarity, stating that as "freedom-loving Americans."

"We unequivocally support those brave men and women in Cuba."

Joshua Dudzik is an associate editor at FoxNews.com