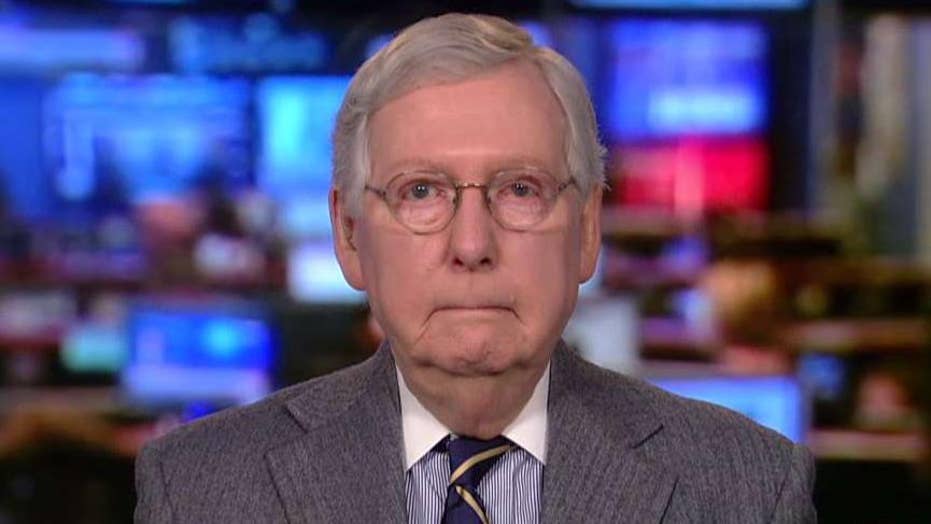 Sen. McConnell: No chance the president is going to be removed from office

Senate Majority Leader Mitch McConnell breaks down how the Senate will handle the impeachment inquiry on 'Hannity.'

Senate Majority Leader Mitch McConnell, R-Ky., told Fox News Thursday night that he will coordinate the defense of President Trump in any impeachment trial with White House lawyers, and proclaimed that there was "zero chance" the president would be removed from office.

"The case is so darn weak coming over from the House. We all know how it's going to end," McConnell said on "Hannity." "There is no chance the president is going to be removed from office."

McConnell also said he hoped that none of the members of his caucus would vote to remove the president from office, adding "it wouldn't surprise me if we got one or two Democrats" to vote to acquit Trump of the charges of high crimes and misdemeanors.

He explained that the articles of impeachment would be different from ordinary legislation that makes its way from the House, in that: "We have no choice but to take it up. But we'll be working through this process hopefully in a fairly short period of time, in total coordination with the White House counsel's office and the people who are representing the president, in the way all of the Senate."

McConnell spoke as the House Judiciary Committee prepared to vote to send two articles of impeachment to the full House of Representatives following a marathon hearing in which seemingly no topic – from Hunter Biden's rampant drug use to a Republican congressman's past drunken-driving arrest – was off-limits.

The majority leader declined to elaborate on what a Senate trial might look like or whether Republicans would call witnesses such as former Vice President Joe Biden, House Intelligence Committee Chairman Adam Schiff, D-Calif., or the intelligence community whistleblower, whose complaint about Trump's July 25 phone call with Ukraine President Volodymyr Zelensky touched off the impeachment inquiry.

"I'm going to take my cues from the president's lawyers," said McConnell, who added that a trial would likely take place early next year if the House voted to impeach Trump before its members went home for the holidays.

"My hope is that it will be a shorter process rather than a long, lengthy process."