Fox News' Sean Hannity condemned radical protesters from both political extremes who demonstrated in Portland, Ore., over the weekend, saying there is no place in the United States for physical violence in pursuit of political ends.

"To each and every single person on either side that has an extreme agenda, you must stop this insanity — this lawlessness," Hannity said Monday night.

The host said violence among both left-wing Antifa protesters and right-wing white nationalist and neo-Nazi groups must be quashed by authorities whenever it pops up.

"Police need to stop this and end it and drop it right when it starts," he said. 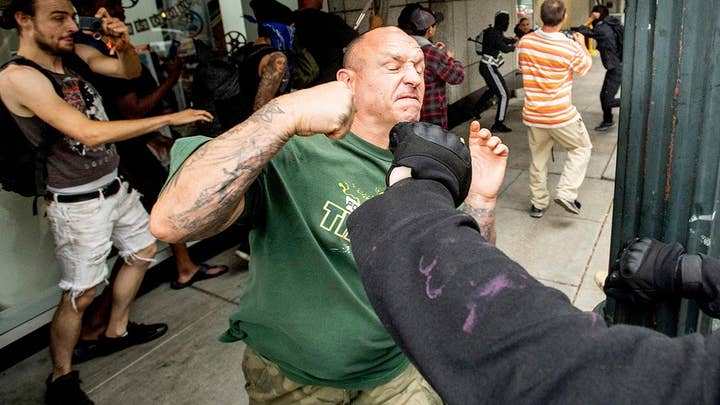 "This kind of behavior is unacceptable, it's insane, it's despicable, it's violence, it's extremism, and it's hurting our country."

"This kind of behavior is unacceptable, it's insane, it's despicable, it's violence, it's extremism, and it's hurting our country."

He called for both sides to take their frustrations out in a more constructive way.

"Let's not forget, we can have political disagreements but at the end of the day, we are all Americans. We're all created equal. We're all one nation under God."

"In the United States, political differences — we solve them at the ballot box... We don't need fists and baseball bats and mace."

Hannity affirmed his and his show's commitment to call out hate groups, racism and public acts of violence in any form.

"This show will always condemn hatred on any side," he said adding that both the Antifa and white supremacist factions have one thing in common.

"They're all tied to sick, ugly, twisted, evil ideologies."