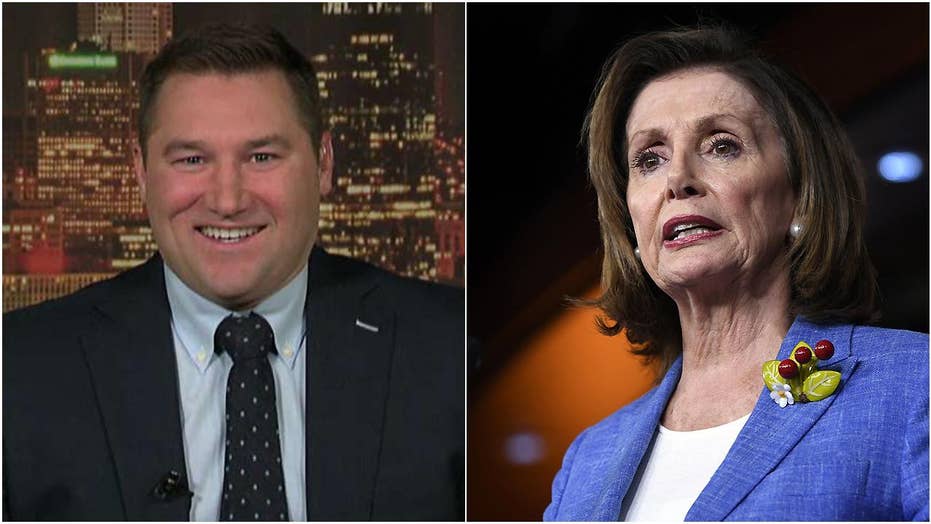 Rep. Guy Reschenthaler, R-Pa., said the decision by House Speaker Nancy Pelosi, D-Calif., to withhold the articles of impeachment from the Senate was "totally backfiring" and mulled a possible Republican takeover of the House in 2020.

"Let Nancy Pelosi hold the articles of impeachment, because the longer this drags out, the more swing voters and independents are coming to Republicans in droves," Reschenthaler said Thursday on "The Story."

"And," he continued, "I know some people think it's a bold statement but I really do think we're going to take back the House in 2020. And, I think President Trump is going to win because the polls are showing that independents are tired of impeachment, they think it's a sham and they know that it's a political hit job."

Reschenthaler, a member of the House Judiciary Committee, was commenting on the nonpartisan Cook Political Report which showed a shift in two battleground states following the House vote on Trump's impeachment.

The district represented by Rep. Matt Cartwright, D-Pa., who voted for both articles of impeachment, has become a toss-up. Trump carried Cartwright's district in 2016 by a margin of 53 percent to 44 percent.

The district of Rep. Justin Amash, I-Mich., also faced a shift after he left the GOP and became a fierce critic of the president, supporting his impeachment in the House. That district, which had been a tossup, was since leaning Republican, the report showed.

"This is totally backfiring on the Democrats and I think Nancy Pelosi let this get way out in front of her," Reschenthaler said of the report. "We have to remember that the far-left social-justice Democrats are running this party now but we are seeing that Trump is up in my home state of Pennsylvania. He's leading the Democrat contenders, sometimes by double digits... and in all those battlegrounds where Democrats hold seats where Trump won, I think we can get a lot of those seats back and take back the House in 2020."

National Republican Congressional Committee Chairman Tom Emmer shared a similar sentiment this past October, saying Democrats have been so irrationally focused on impeaching Trump they will hand the House of Representatives back to the GOP.

"Some of them live in a bubble -- they think they're winning," he said.

Earlier this month, Fox Nation host Tammy Bruce said an across-the-board GOP sweep of the White House, Senate and House in 2020 was entirely possible due to a growing backlash against the Democrats' impeachment efforts.

Republicans lost the House majority by 36 seats in 2018.