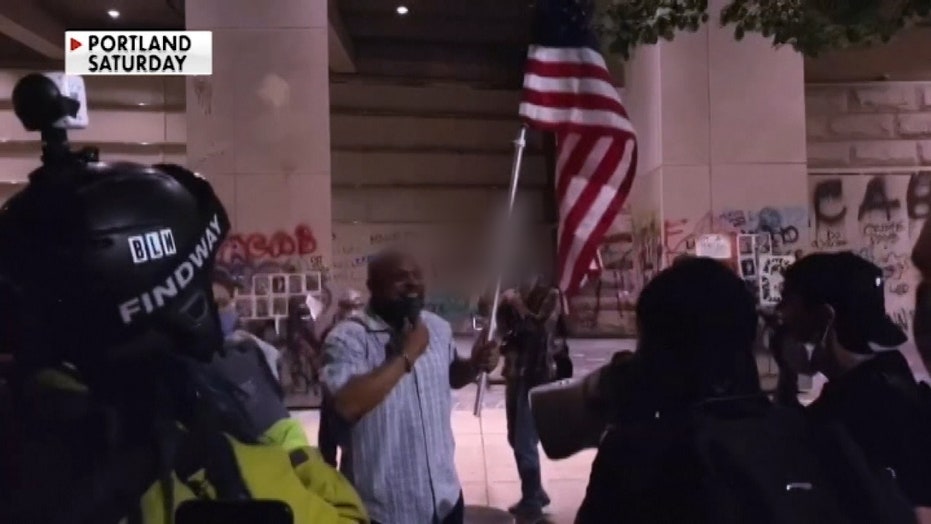 Retired Marine Corp. officer, Gabriel Johnson, was looking for unity when he carried an American flag into a Portland protest but instead he found nothing but anger and lawlessness. 'I fought for this country and this is not what I fought for.'

For more than 50 nights, Gabriel Johnson, 48, a retired Marine, has been kept awake by the sounds of rioting and explosions taking place outside his window in Portland, Ore. After two months of living in fear, at 3 a.m. Sunday he had had enough, “at that point I [had] counted 82 explosions and just thought, you know, somebody has to do something.”

Living only a block away from the Mark O. Hatfield U.S. Courthouse in downtown Portland, which has become an epicenter of violence that has overtaken the city, Johnson marched into the chaos with his American flag in hand.

While he expected his actions would be divisive to some, the retired Marine was not prepared for the reaction he got.

“I was being called the N-word by Black people. People were chasing me around with baseball bats,” Johnson told Fox News.

While the Marine Corps veteran, who is Black, experienced many eye-opening events that night, there was one thing he saw that shocked him the most.

“Antifa has infiltrated Black Lives Matter,” Johnson said as he described a woman dressed in Black Lives Matter gear who showed him threatening footage of protesters following him back to his home, and letting him know they were keeping tabs on him. According to Johnson, this woman was also holding an Antifa pen and was communicating with others via walkie-talkie.

Another scene that left him in utter dismay was seeing a 65-year-old Black veteran attempt to stop the burning of Johnson’s flag, only to be beaten by alleged Black Lives Matter protesters.

“He said, 'there's no way you're gonna burn this flag.’ That was followed up by Black Lives Matter, Black men, running after this man, punching him in his face, grabbing the flag and throwing it over the fence,” said Johnson as he emotionally recalled the horrific incident.

The lifelong Portland resident blames the destruction of his city on the inaction of local leadership.

"The lack of police response, city response, response from our mayor has just given free rein to holy hell to take place at that 11 o’clock hour to 3 in the morning.” 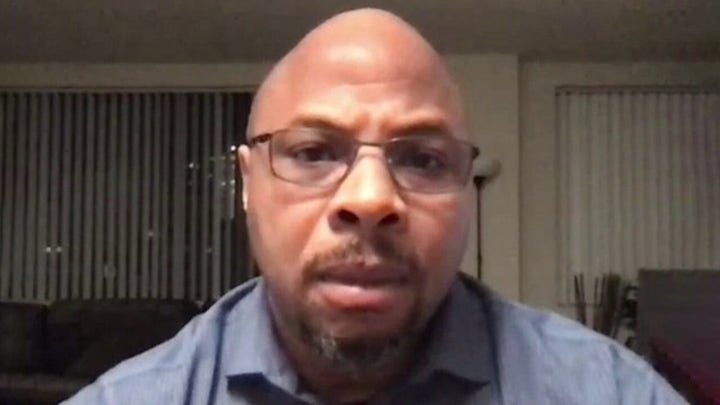 As for the federal officers who have been sent by the Trump administration into Portland over the past week to end the violence, Johnson doesn't oppose the extra assistance.

“In absence of the local police what do we expect?” he said. "If we as a city aren't going to police ourselves, then we should expect someone to come in and police for us.”

On Friday, Johnson told "Fox & Friends" host Steve Doocy he wanted to use the American flag's symbol of unity to "bridge the divide" and possibly start a dialogue with protesters.

"I think the message has been lost at this point with the onslaught of Antifa, their tactics -- this has to stop," he urged.

"Have you thought about moving out of Portland?" asked Doocy.

"This is my city," Johnson replied. I was raised here. I will not let a bunch of terrorist thugs run me out of my city."