Ron DeSantis: You don't have to politicize every tragedy in this country

A federal judge dismissed a lawsuit filed against Gov. Ron DeSantis, R-Fla., and other state officials in response to the controversial Parental Rights in Education law on Tuesday.

Judge Allen Winsor struck down the suit originally filed in March but later revised by LGBTQ+ advocacy groups Equality Florida and Family Equality along with students and educators, issuing a 25-page order that claimed the plaintiffs lacked legal standing to proceed but neglected to assess the constitutionality of the case.

"The principal problem is that most of plaintiffs' alleged harm is not plausibly tied to the law's enforcement so much as the law's very existence," Winsor's dismissal read, according to the Tampa Bay Times.

"Plaintiffs contend the law's passage, the sentiment behind it, the legislators' motivation, and the message the law conveys all cause them harm. But no injunction can unwind any of that."

Winsor added that the plaintiffs claimed they were already experiencing the consequences of the law before it went into effect and therefore the harms "predating [the] statute's enforcement were not caused" by the statute itself.

"Plaintiffs’ complaint is replete with allegations showing their asserted injuries flowed from something other than the law’s enforcement. Indeed, they allege that the law’s 'harmful effects' were 'already manifest' even before the law became effective — before, that is, it even could be enforced," the dismissal read.

Controversy surrounding the bill, which banned gender identity and sexual orientation education for young school children, ensued as DeSantis waged war with the Walt Disney Company and mainstream media outlets while LGBTQ+ advocacy groups slammed the bill and its supporters.

Supporters of the bill rushed to its defense, however, blasting opponents as "groomers" and staging boycotts against Disney for their outspoken opposition.

"I mean, obviously. This law is common sense. That’s why democrats and media activists (but I repeat myself) had to lie about it and push straight up propaganda like ‘Don’t Say Gay’ to create the illusion of controversy," DeSantis Rapid Response Director Christina Pushaw tweeted in August. 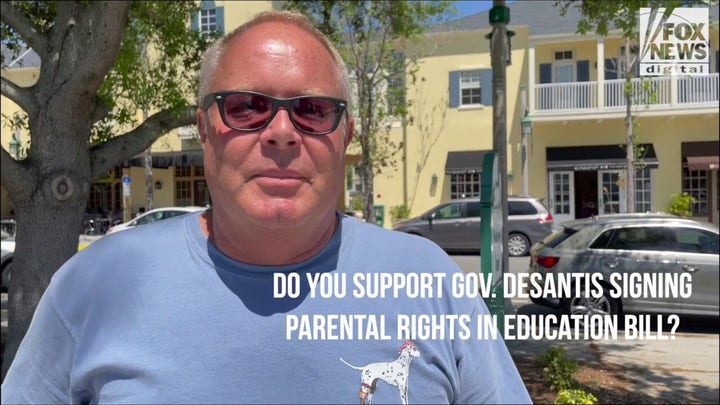 DeSantis signed HB 1557 into law on March 28, tweeting, "Today, I signed HB 1557, the Parental Rights in Education Act, into law. It ensures parents can send their kids to kindergarten without gender ideology being injected into instruction and they will be notified and have the right to decline healthcare services offered at schools."