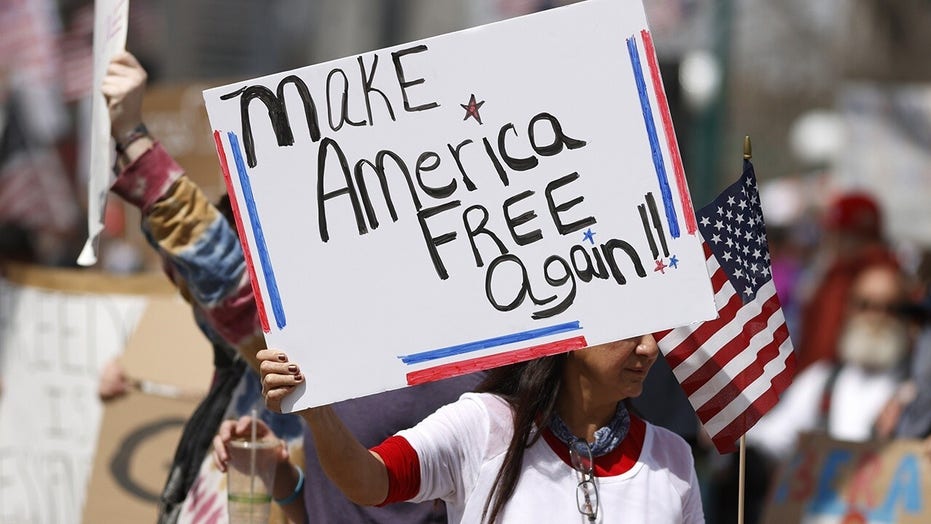 President Trump says some governors 'have gone too far'; John Roberts reports from the White House.

Facebook has banned some pages promoting protests of stay-at-home mandates that challenge the government's advice about social distancing amid the coronavirus pandemic.

"Unless government prohibits the event during this time, we allow it to be organized on Facebook. For this same reason, events that defy government's guidance on social distancing aren’t allowed on Facebook," a company rep told Fox News.

Protests have popped up in various states among residents who disagree with certain stay-at-home guidelines. Many of the protests feature large groups of people closely gathered as the nation has been instructed to social distance in an effort to combat the spread of COVID-19.

A Facebook source noted that the company is aware that some people may seek to protest orders to stay at home, but the company will only allow the protests to be promoted on the platform if the people follow social distancing guidelines. The company is focused on “removing content that advocates for in-person gatherings defying government health guidance,” the sources added.

The company will also remove content and claims that are intended to “discourage treatment” or take “appropriate precautions” to help combat the coronavirus pandemic.

But not everyone agrees with Facebook's new policy. Cornell Law School professor William A. Jacobson told Fox News that the social media giant "is acting on instructions from state governments to silence lawful political speech."

"As such, Facebook may have crossed the line from platform 'misinformation' control, which arguably is lawful as a private entity, to acting as an extension of government," Jacobson said.

As Facebook was announcing their new guidelines, CEO Mark Zuckerberg appeared on ABC’s “Good Morning America” on Monday to declare that he also wants to help track coronavirus information and collect data.

“We're able to work with the researchers to produce an interactive map based on the aggregate data that provides a daily updated county by county map of this, of the symptoms that people are experiencing, across the country,” Zuckerberg added. "That's a lot of the work that the health researchers at Carnegie Mellon have been doing to make sure the data that's coming from the survey is high quality and that it correlates with what hospitals are seeing on the ground."