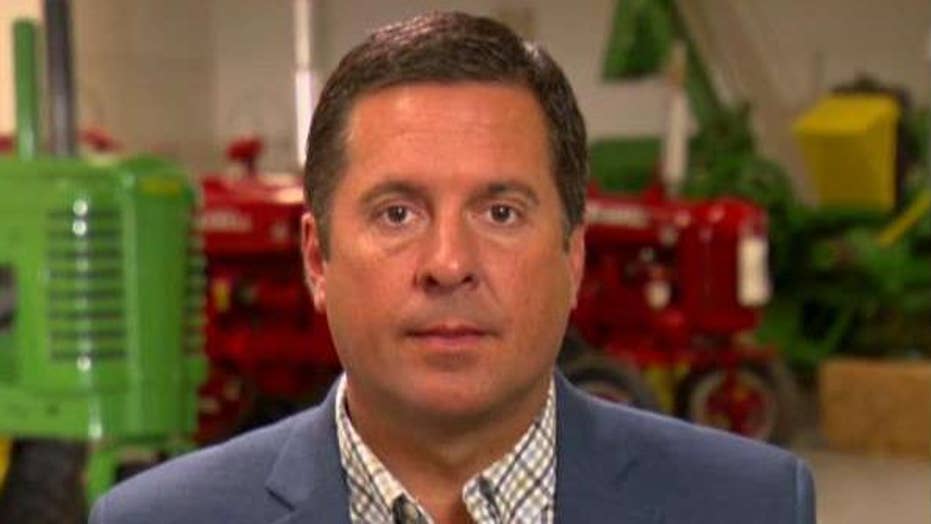 New documents reveal that the FBI retrieved several memos from James Comey, including a secret one that the fired FBI director drafted the night before agents arrived; reaction from California Congressman Devin Nunes, ranking members of the House Intelligence Committee.

Appearing on “America’s Newsroom” with host Sandra Smith, Nunes reacted to a report revealing former FBI Director James Comey gave the bureau a memo -- retrieved as “evidence” -- written after his termination in May of 2017.

The day after agents visited his home, Comey admitted in congressional testimony that he had leaked memos purportedly detailing recollections of his conversations with President Trump, so that Special Counsel Robert Mueller would be appointed. In addition, some of Comey's memos exposed the "code name and true identity" of a confidential source.

“The [Inspector General] report is critical, but I would say most critical in all of this is going to be the U.S. Attorney out of Connecticut Mr. Durham’s investigation because that comes with real FBI agents able to go out and talk to people that are no longer working at the Department of Justice (DOJ) or the FBI,” Nunes said. “And, I think [it] will constitute a real investigation.”

DOJ WILL NOT PROSECUTE COMEY FOR LEAKING MEMOS AFTER IG REFERRAL: SOURCES 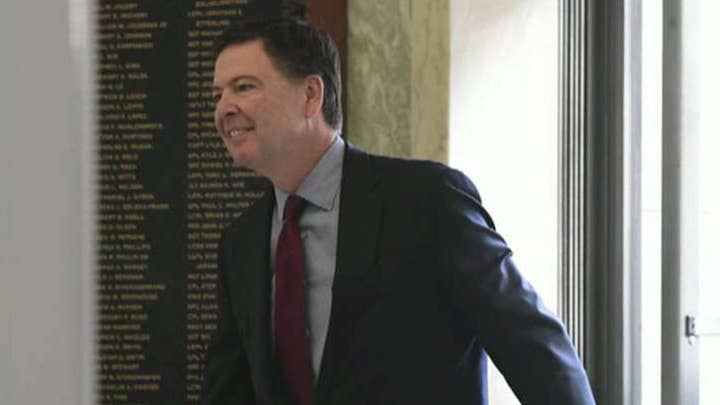 Documentation of the visit was released Wednesday in response to a Freedom of Information Act request by the transparency group Judicial Watch. Additionally, Comey had told agents that “to the best of his recollection, two [memos] were missing.” The filing acknowledged that Comey had maintained a far more detailed and lengthy private paper trail than was previously known.

Nunes explained to Smith: “Well the whole idea that you could take something that is marked SECRET: NOFORN [no foreign nationals], and then just decide on your own to take that out of the SCIF—so, out of a controlled area—not handled properly and take to someone’s house or a university or wherever these memos went to...you just can’t do that.”

He said that what Comey had done was in line with the actions of former Secretary of State Hillary Clinton who had kept private servers with classified information in her home.

“That’s illegal. The same is true for a document…there’s been people who have been busted for way less than that I will tell you for sure,” Nunes told Smith. “Rank and file military intelligence people would never get away with what Mr. Comey, so far, is getting away with.”

The Justice Department has decided against prosecuting Comey for leaking classified information following a referral from the department’s inspector general, sources familiar with the deliberations told Fox News earlier Thursday.“Everyone at the DOJ involved in the decision said it wasn’t a close call,” one official said. “They all thought this could not be prosecuted.”

Comey has denied leaking any classified information. However, according to the DOJ, Comey outlined "foreign intelligence information obtained from and through" the key human source, "information about whether the FBI initiated coverage through the Foreign Intelligence Surveillance Act (FISA) on a particular individual," relevant "sources and methods" used in the FBI's investigation and "information concerning the President's foreign policy decision-making.”

“A spill team would only be sent to collect this classified information,” Nunes told Smith.

“This is bigger than just these memos. Remember those memos were leaked by Comey’s own admission to spur a special counsel—the appointment of Bob Mueller. Just that alone in of itself ought to get Americans to sit back and think, ‘Well, wait a second here. You have a guy who is writing his own memos that are classified, then taking them to places and leaking them on purpose to get a special counsel.’

"That’s why this has been such a travesty.”

“If [Durham] convenes a grand jury, I think then this will get much more serious and then we’ll be able to see if anybody is actually held accountable. I think at a minimum what the American people can expect is we will finally understand what spurred this investigation going back all the way to 2016.”