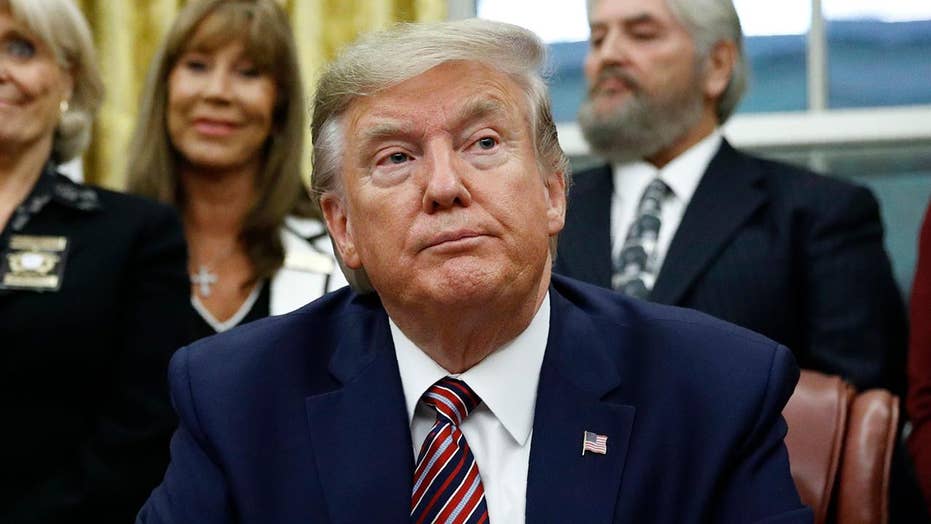 CNN is apparently interested in another kind of scoop these days.

The network's continuing obsession with President Trump’s ice cream intake resurfaced on Friday when the network reported that the sugary treat was served as news broke that Iranian Gen. Qassem Soleimani was killed by a U.S. airstrike.

CNN’s Kaitlan Collins penned a blog post headlined, “President Trump dined on ice cream as news of the airstrike broke,” that also revealed meatloaf was served for dinner on Thursday night at Mar-a-Lago.

“As meatloaf and ice cream were served, the Pentagon confirmed that the US was behind the strikes, the only statement from the administration throughout the night,” Collins wrote before noting that Trump once ate cake when U.S. forces carried out a missile strike on a Syrian airfield.

CNN’s own Steve Cortes even mocked the tweet, joking that Trump only had ice cream after finishing his entrée of crushed glass.

“The flavor: revenge. It was a dish best served cold,” Ben Shapiro added.

“Of course, it’s important to add ‘color’ to a story and if, say, there was a meeting and a reporter described who sat where to provide important context, that’s actually helpful. But this? It’s a stretch,” NewsBusters managing editor Curtis Houck wrote.

“There are plenty of valid reasons to argue against targeting a high-ranking foreign government official. But our newsroom is so jaded and anti-Trump that it posted this tweet which lacked any journalistic merit,” a current CNN employee told Fox News.

"This should be a story about Soleimani planning imminent attacks on diplomats & how American lives were saved because of @realDonald Trump decisive actions," White House Press Secretary Stephanie Grisham tweeted.

Feminist Jill Filipovic wrote an op-ed for CNN in 2018 that criticized the Trump Administration’s proposal that food delivery services could replace a portion of food stamps with actual food. She made several points, including that Trump “reportedly enjoys treating himself to an extra scoop of ice cream after dinner every night” but “proposes cutting billions in social support and health care.”

A CNN social media staffer chose the snarky sentence about Trump’s ice cream habit as the paragraph to invite CNN Twitter followers to click on for the story. The tweet was immediately met with criticism, with one user asking, “Is there an actual journalist left at CNN?” Others pointed out that Trump can afford his own ice cream, calling the tweet “ridiculous” and “worthless.”

Back in May 2017, CNN was widely panned for devoting significant airtime to a Time magazine report that Trump was served two scoops of vanilla ice cream at a dinner with reporters. CNN’s often-sarcastic chyron even called the extra scoop of ice cream an “executive privilege.”

CNN’s Jeanne Moos reported the extra serving of ice cream in a segment that also pointed out that Trump was possibly served a different salad dressing than his guests and that he sometimes eats fast food.

Ice cream isn’t the only food that CNN uses as an attempt to shame the president.

In 2016, the liberal network criticized Trump’s Diet Coke intake, literally lining up 12 cans of the beverage on Brooke Baldwin’s anchor desk to demonstrate the amount of soda the president reportedly consumes.

CNN’s chyron at the time said, “Trump reportedly drinks 12 diet cokes a day (Is that normal?)”