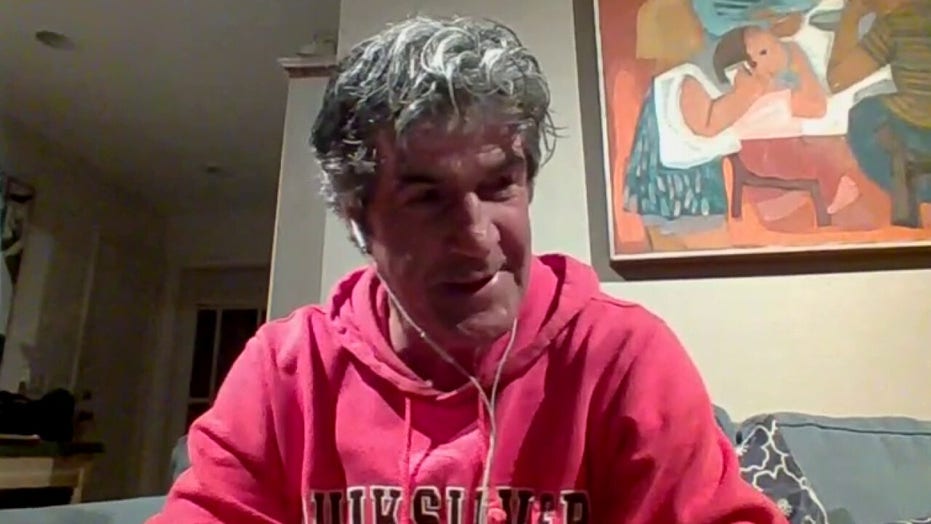 Cyclist who confronted Chris Cuomo speaks out: He was like a boiling pot

Long Island resident David Whelan says he was verbally attacked by Chris Cuomo when he challenged the CNN anchor for breaking coronavirus quarantine.

CNN's Chris Cuomo resembled "a boiling pot" when he was confronted for not self-quarantining with the coronavirus earlier this month, a Long Island, N.Y., bicyclist told Fox News Friday night.

David Whelan shared his story during an appearance on "Tucker Carlson Tonight."

"It was Easter Sunday evening, it was chilly and cold," Whelan recalled. "I grew up about 1,000 feet from where he [Cuomo] is building his new house, which is nothing but a steel frame [at this point].

"I go by, down the trail that runs past where his new structure is being built and there's a bunch of people there," Whelan continued. "I've been riding for seven or eight miles, take a little break, and am just walking. And a woman says 'May I help you?' I said 'No, I'm just looking'."

At that point, Whelan said, he thought he recognized Cuomo, who announced March 31 that he had tested positive for coronavirus. Whelan said he asked Cuomo if he had the coronavirus and was supposed to be in self-quarantine.

Whelan told host Tucker Carlson that his daughter is a physician at Johns Hopkins University and he has become accustomed to noticing and calling out violations of social distancing guidelines.

"He continued to come closer and closer, and I would like to say he's like a boiling pot, you could see his head," Whelan recalled. "He was just getting more and more angry. And I said, 'So are you gonna lose your temper like you did on the guy at Shelter Island?'"

At a private event last year in the Hamptons community, Cuomo was caught on tape swearing profusely at a man who called him "Fredo," a reference to the weak, younger Corleone brother in "The Godfather." At the time, Cuomo claimed he was the victim of an anti-Italian slur and appeared to threaten to "throw [the man] down [a flight of] stairs" and "f---ing ruin [his] s--t."

Whelan told Carlson that after a few moments of Cuomo venting at him, Whelan wanted to "move on" with his ride.

He claimed no one in the group with Cuomo had gloves or masks, but said he understood the family likely has "cabin fever" like much of America.

"But he [Cuomo] told me he was going to meet me, and he goes 'You are going to meet me over this, you will meet me again over this'. At that point, he's now getting about 40 feet away," Whelan said.

When Carlson asked Whelan whether he had been tested for coronavirus after coming in contact with an infected person, Whelan responded that testing tends to be for privileged people like Cuomo, whose late father, Mario Cuomo, was a governor of New York, and whose brother Andrew Cuomo is the state's current governor.

"For most normal people, you can't get tested," Whelan said. "I made my own mask weeks ago, I hit it with alcohol every day."