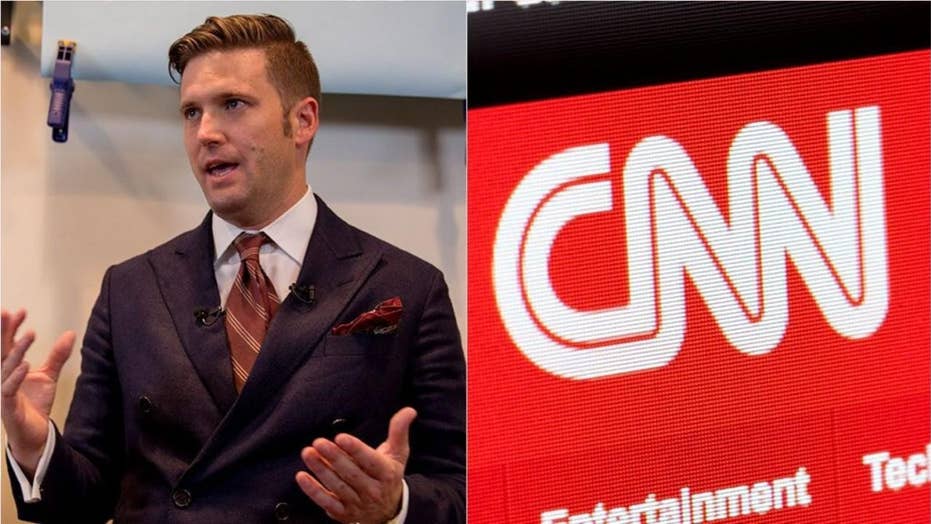 CNN's 'The Lead with Jake Tapper' is under fire for providing a platform to white supremacist Richard Spencer. The move is being seen by some media watchdogs as another example that CNN will do whatever it takes to criticize President Trump. Many viewers, including some former and even current staffers, took to social media to voice their disgust with the network for airing the interview.

CNN shocked viewers – and even some current and former staffers – on Tuesday when it aired an interview with infamous white nationalist Richard Spencer, with some media watchdogs positing that the struggling liberal network will do whatever it takes to criticize President Trump.

The segment, which aired on “The Lead with Jake Tapper,” put a spotlight on Spencer ditching his Trump support. “Many white nationalists will eat up this red meat that Donald Trump is throwing out there. I am not one of them,” Spencer said on Tapper’s show.

A current CNN employee reached out to Fox News, on the condition of anonymity, to express discomfort with the network putting Spencer on air.

“I thought I had seen it all at CNN, then this. I guess any guest they think can embarrass Trump,” the CNN staffer told Fox News. “What’s next, a Klansman wearing a hood?”

“I thought I had seen it all at CNN, then this. I guess any guest they think can embarrass Trump.  What’s next, a Klansman wearing a hood?”

CNN national correspondent Sara Sidner’s interview aired on Tapper’s program a little after 4:30 p.m. E.T. on Tuesday as the network continued to cover the reaction to Trump’s recent controversial tweets. The backlash against the segment was swift, and Tapper reportedly deleted a tweet promoting it. CNN did not immediately respond when asked why Tapper deleted the tweet.

The Anti-Defamation League has called Spencer a "symbol of the new white supremacy." He has publicly called for the removal of African-Americans, Hispanics and Jewish people from the United States.

Spencer’s highly protested public speeches often include attendees making Nazi salutes and he was a scheduled speaker at the 2017 “Unite the Right” rally in Charlottesville, Va., that led to deadly violence.

Media Research Center vice president Dan Gainor pointed out that CNN was also recently criticized for glorifying “violent, left-wing lunatics” antifa, so anything is possible when it comes to the liberal network.

“Now they help a white supremacist scumbag push his agenda on national TV. All to do damage to the president. CNN is trying desperately to divide our nation,” Gainor told Fox News.

"CNN is trying desperately to divide our nation."

“CNN has on-air debates among hosts over the journalism ethics of interviewing Kellyanne Conway and other members of the Trump administration, but apparently putting Richard Spencer on the air is a no-brainer,” Krakauer wrote. “Whoever made this shameful decision should be fired.”

CNN did not respond to a request for comment.

However, CNN’s media pundit Brian Stelter went to bat on behalf of his network.

“When news outlets are covering the scourge of racism, should the coverage incorporate interviews with racists? The question is back on the front burner because white nationalist leader Richard Spencer was interviewed by CNN,” Stelter wrote in his media newsletter.

Stelter noted the case against CNN’s decision and made sure to note that Spencer was only on CNN for “two short clips,” the interview was taped, reporter Sara Sidner has “been covering hate groups and racists for years,” and that “some journalists say you can't cover hate without talking to haters” before offering his conclusion.

“To say that figures like Spencer should never ever be interviewed on-air seems like a black and white answer in a world of gray,” Stelter wrote. “Instead, it should be about ‘how’ they are incorporated into the coverage. And that’s an important conversation to keep having.”

Infamous white nationalist Richard Spencer was given a platform by CNN’s Jake Tapper.

Tapper even responded to someone accusing him of “mocking the criticism” that his show provided a platform to a white nationalist.

“I’m not mocking the criticism. @sarasidnerCNN covers racists and white supremacists for us (among other subjects) and does a great job. She did a taped package for cnn about the reaction of white supremacists to the president’s tweets,” Tapper wrote.

But not everyone is buying the explanations of CNN’s Stelter and Tapper.

DePauw University professor and media critic Jeffrey McCall told Fox News that it’s “hard to see that getting input from Spencer advances rational national dialogue or the current story in any meaningful way.”

“CNN appears to have been giving Spencer a platform solely for sensationalism or shock value, not a great basis for doing journalism on such a controversial topic."

“CNN appears to have been giving Spencer a platform solely for sensationalism or shock value, not a great basis for doing journalism on such a controversial topic,” McCall said.

Conservative strategist Chris Barron told Fox News the decision is “absolutely reprehensible and would be for any network” on television but is especially hypocritical coming from CNN.

“It is particularly outrageous that CNN, which insists on ‘fact-checking’ the president in real time, has openly debated not having on administration officials and who accuse anyone to the left of Marx of being a ‘white nationalist,’ would be the ones actually giving avowed white nationalists a ticket into the houses and airports of millions of people across the globe,” Barron said.

“CNN is putting a literal white supremacist on their network so they can dunk on Trump. They literally have zero credibility left,” social media strategist Caleb Hull tweeted.

The Orthodox Jewish Public Affairs Council released a statement condemning CNN for giving Spencer a platform, which the organization said “embolden bigots” and “gives them a larger following” than they deserve.

“No one has done more for the PR of White Nationalists since 2015 than some media networks such as CNN. Spencer has been active for many years but few outside his bubble knew of him until media networks started given him outsized attention,” the statement said. “Hopefully, our release will lead reporters to cut back on giving Spencer and others like him free/outsized PR.”

Countless others took to twitter to condemn CNN for the Spencer interview.