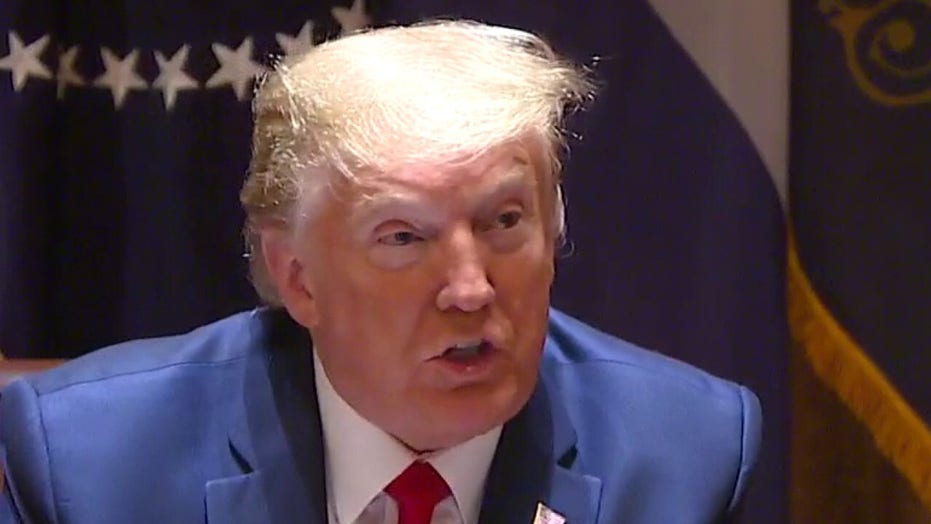 A CNN poll published Wednesday shows President Trump with a seven-point lead over Joe Biden in several battleground states – but the network was accused of burying its own findings.

A review of transcripts found that only one CNN program on Wednesday mentioned the poll of registered voters that indicating 52 percent favor Trump, as opposed to 45 percent for Biden, in key battleground states.

During the 11 a.m. ET hour of “CNN Newsroom,” John King noted that brand-new CNN poll numbers indicated Biden had a national lead in the race for president before downplaying the battleground-states information.

“But remember 2016. We pick presidents state by state. Look at the horse race in the 15 states that CNN designates as presidential battlegrounds. Take a peek. The president leads in those battleground states, 52 percent to 45 percent,” King said. “Be careful not to invest too much in any one poll, especially in the middle of a pandemic.”

CNN ACCUSED OF 'EGREGIOUS MISREADING' OF DATA FROM CORONAVIRUS SURVEY

King then began a panel discussion, warning a Politico reporter and CNN’s Jeff Zeleny not to “overinvest in any one poll” before tossing asking their opinions.

The panel never got to Trump’s lead in battleground states before King had to cut the segment short so CNN could air New York Gov. Andrew Cuomo’s daily press conference. Trump’s battleground lead was never referenced again on air for the rest of the day.

“Polls are expensive, news organizations tend to hype them breathlessly to generate headlines in rival media outlets… yet CNN seemed oddly unenthused about its own poll."

CNN polls were cited on-air at other times on various shows, but only in reference to trusting Dr. Anthony Fauci more than Trump, whether sports leagues should reopen, and other topics.

National Review critic-at-large Kyle Smith noticed that the poll results weren’t prominently featured by CNN on its website and penned a column headlined, “CNN Buries Its Own Poll Results on Trump’s Favorability. Guess Why.”

Smith noted that Trump’s approval ratings “was tied for his all-time high in CNN polling” but the story was buried on the network’s website behind a variety of coronavirus stories, some of which focused on local news such as a story about a man who refused to wear a mask and broke the arm of a Target employee.

“Only after all of this stuff did we learn that CNN has a new poll out, under the headline, ‘CNN Poll: Biden tops Trump nationwide, but battlegrounds tilt Trump,’” Smith wrote.

“Polls are expensive, news organizations tend to hype them breathlessly to generate headlines in rival media outlets… and politics is one of CNN’s core topics. Yet CNN seemed oddly unenthused about its own poll,” Smith wrote. “The story to which the homepage linked doesn’t mention that Trump had never scored higher in a CNN poll.”

A different CNN story headlined, “CNN Poll: Negative ratings for government handling of coronavirus persist,” made a brief reference to Trump’s rating now matching “his high point in CNN polling dating back to the start of his term.”

The National Review critic noted that CNN’s polling data included a bunch of tidbits that aren’t particularly favorable of President Trump, but “the single most surprising and hence most newsworthy detail of the poll was that Trump holds a seven-point lead over Biden in the battleground states.”

Smith bashed CNN for leaving out figures related to Trump holding a lead over Biden in the battleground states, and the liberal network eventually updated its online story.

“This story has been updated with additional details about the battleground state findings,” the article now states.

As Smith pointed out, the CNN story even “downplays its own finding” with a paragraph questioning the data as a possible “fluke.”

“Given the small sample size in that subset of voters, it is difficult to determine with certainty whether the movement is significant or a fluke of random sampling. Nationally, Biden holds a lead over Trump among voters age 65 and older, a group which has been tilted Republican in recent presidential elections,” CNN wrote.