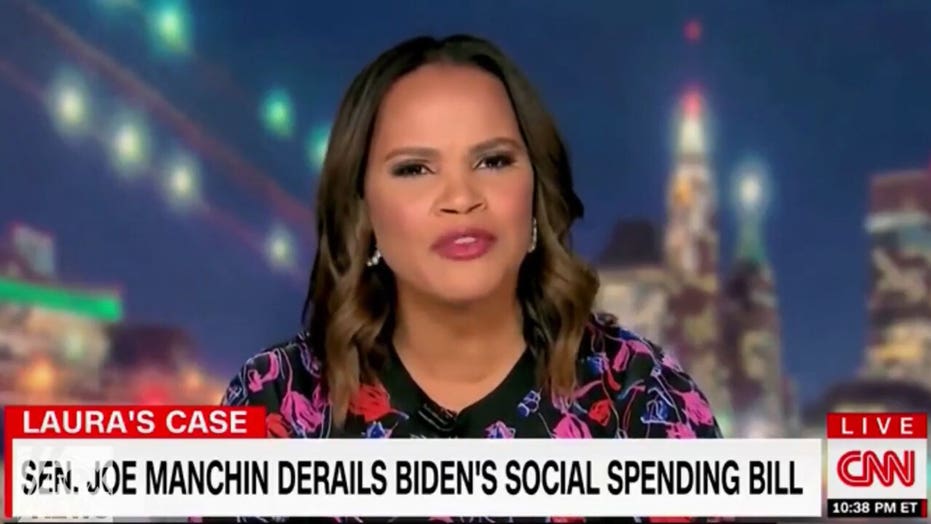 CNN host lashes out at Joe Manchin over opposition to Build Back Better bill: 'One man's vote'

While guest-hosting "Don Lemon Tonight," Coates slammed Manchin for "derailing" the bill with his announcement on "Fox News Sunday" that he would not be voting for it, and claimed that the moderate Democrat's vote counted more than other members of Congress.

"For a country founded on the refusal to have our lives ruled by a king, Congress seems to be controlled by the decisions of one man an awful lot," Coates said. "Take the Build Back Better agenda, heralded as a cornerstone of the Biden-Harris administration. For months Democrats have tried in vain to persuade Senator Joe Manchin to vote for the legislation."

"The president has wined and dined him and staked his reputation as the consummate Senate negotiator on his ability to lead the horse to water and make him drink. But in the end, Senator Manchin would not budge, steadfast in his resolve to do what he claims is in the best interest of West Virginia," she added.

Coates played an audio clip of Manchin defending his decision to oppose the bill to a local West Virginia radio outlet and explaining that he wasn't going to be bullied into submission.

"And just like that, one man’s vote derails the bill. If only everyone’s vote counted as much as that of Senator Manchin, especially in the face of relentless attacks on voting rights that make a mockery of one person, one vote," Coates said after the clip.

"But one man’s refusal to even entertain altering the filibuster to fortify voting rights again illustrates the point. Even the act of protecting your access to the polls to vote in whatever way you choose seems to come down to just one man," she added. "The same man. The one who gets paid leave, paid for by taxpayers, as a United States Senator, but doesn’t think it should be extended to you in the same way. One man’s vote."

Coates lamented what she believed was the constant waiting to see how one individual's decision, whether it be in the Senate, on the Supreme Court, or a Vice President's tie-breaking vote, would impact everyone's lives, freedoms and American democracy.

"Our Declaration of Independence begins with, 'We the people,' not ‘I’ the individual. But here we are, still waiting for one person to decide how the rest of us shall live," Coates said.

Coates' focus on Manchin alone mirrored a panned Associated Press article last week that framed him as the "single Senator" blocking Biden and largely downplayed all 50 Senate Republicans also in opposition. If Manchin alone in the Senate were opposed to Biden's bill, it would pass with a whopping 99 votes.

Coates joins a throng of other liberal media figures losing it over Manchin's decision not to back the massive spending bill, such as The Washington Post's Jennifer Rubin, who claimed his no vote would mean democracy was "hanging by a thread," and MSNBC's Mehdi Hasan, who suggested Manchin may have killed the future of American democracy.