Biden aimed to frame the state of U.S. politics as a battle between "equality and democracy" and a GOP allegedly assaulting those principles in a campaign-style speech at Independence Hall in Philadelphia, with a widely criticized background that included ominous red lighting.

"The fact that this isn’t photoshopped is surreal," Barstool Sports founder Dave Portnoy tweeted. "Every time I think Biden and crew can’t be dumber they outdo themselves. Seriously who gives a speech warning people about how dangerous Republicans are to Democracy while having a background that looks like the Soviet Union and Hitler had a baby?"

Political satirist Tim Young’s eyebrows were raised when he tuned in, too.

"I'm not saying ‘fascism’ officially had its coming out party in America tonight... I'm just saying Biden condemned his political opponents as a threat to America and democracy set to a blood red background with the military standing behind him," Young wrote.

Fox News’ Kayleigh McEnany called it "a hellish red background," while others couldn't believe the images circulating on social media were real.

"I can’t believe this is a real photograph. It depicts the president of our nation, as he took to the airwaves and spoke about his fellow citizens as if they were sewer rats," Ohio Republican Senate hopeful J.D. Vance tweeted.

"The red color in the background must be symbolizing the red wave that is coming in Nov following Biden’s demonic and divisive speech," commentator Mercedes Schlapp reacted.

President Biden delivers remarks on what he calls the "continued battle for the Soul of the Nation" in front of Independence Hall in Philadelphia on Thursday, Sept. 1, 2022. (REUTERS/Jonathan Ernst)

"The optics of Biden's speech instantly became a source of Internet chatter with the weird red background that made the President look like he was giving a stump speech from Dante's Inferno," Jonathan Turley wrote.

The image of Biden looking angry with clenched fists in front of the "hellish red background" has generated an onslaught of memes, comparisons to historical villains and even resulted in the term "pure evil" trending on Twitter.

"If you're focused on the background of President Biden's speech, you’ve lost it," MSNBC executive producer Kyle Griffin tweeted.

Many others took to Twitter with thoughts on Biden's backdrop:

During the remarks, Biden slammed former President Donald Trump, the Jan. 6 attack on the Capitol, Republican efforts to overturn the results of the 2020 presidential election and Trump's MAGA supporters.

"Donald Trump and the MAGA Republicans represent an extremism that threatens the very foundations of our Republic," Biden said. "MAGA Republicans do not respect the Constitution. They do not believe in the rule of the law. They do not recognize the will of the people. They refuse to accept the results of a free election." 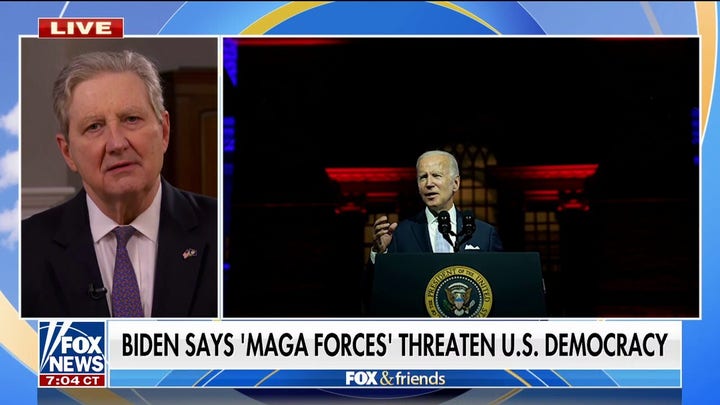