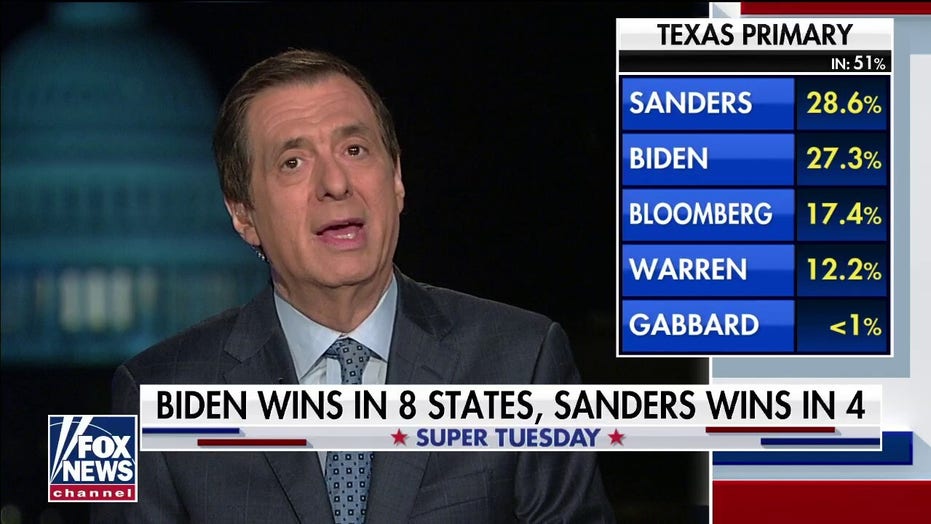 Howard Kurtz: If money and ground game were most important, Bloomberg would be 'more than President of American Samoa right now'

Howard Kurtz: If money and ground game were most important, Bloomberg would be 'more than President of American Samoa right now'

It didn’t take a political genius to figure out that Joe Biden was headed for a strong night.

In three of the early Super Tuesday states—Virginia, North Carolina and Alabama—all the cable news networks projected a Biden win the second the voting ended. That is unusual, and means it wasn’t even close. In fact, Biden’s victory margin over Bernie Sanders in Virginia, 30 points, proved as decisive as it had been in South Carolina. And he was soon projected to win Oklahoma, Tennessee, Arkansas and, amazingly, Massachusetts as well.

By the time Biden captured Texas -- which, let's face it, almost no one thought he would do in light of Sanders' earlier lead-- he had rolled to a nine-state transformation of the race. The sense of shock on the cable news channels was palpable. And this morning: a "remarkable show of force for Mr. Biden," says the New York Times. "Biden engineered one of the most monumental political comebacks in the history of party primaries," says Politico. And these weren't overstatements.

This is the same guy, the former vice president, who was written off by so many pundits and reporters in what is now clearly exposed as an act of journalistic malpractice. Now the press is marveling at Biden’s strength.

Of course, Biden was always expected to do well in the eastern and southern states, before most of the country went to sleep, while Sanders’ strength lay out west. And that became more clear when Fox called Colorado for Bernie at 9 p.m. ET and California, the biggest prize, at 11 p.m. ET, easing the disappointment of dropping so many states to the former VP.

Just as the press denigrated Biden all year, the script was suddenly flipped. Even though there were just two full days between South Carolina and Super Tuesday, Biden got a tsunami of positive coverage, if for no other reason that the pundits like winners. And that was reflected in exit polls showing that late deciders broke heavily for Biden.

It wasn’t just the media, of course. In just 48 hours, Amy Klobuchar and Pete Buttigieg bowed out and backed Biden, and a ton of other endorsements rolled in. There was a palpable sense, amplified by the coverage, of the party closing ranks behind the 77-year-old candidate. Or, as Sanders would say, the Democratic establishment was embracing a longtime insider.

And let’s face it: Many liberal pundits and some anti-Trump conservatives banged the drum about how Sanders would be crushed by the president and hurt the down-ballot candidates. We kept seeing voters who loved Bernie telling reporters that they had to abandon him because their top priority was ousting Trump.

The conventional wisdom was that Biden wouldn’t be able to capitalize on his South Carolina blowout because his campaign was broke and he had little ground organization in the 14 states voting on Tuesday. I say every four years that the press wildly exaggerates the importance of money and organization. They matter, of course, but not as much as the candidate and the message. Otherwise, Trump would have lost in 2016 after being overwhelmingly outspent, and Bloomberg would be the big winner today. I read endless articles about Elizabeth Warren’s awesome field operation in Iowa and other states, and she’s been shellacked in every contest.

Even with a third of the delegates chosen on a single day, the race has a long way to go. Bernie Sanders still has a passionate following. But Joe Biden now has a better shot at the presidential nomination than he has, well, ever in his career.