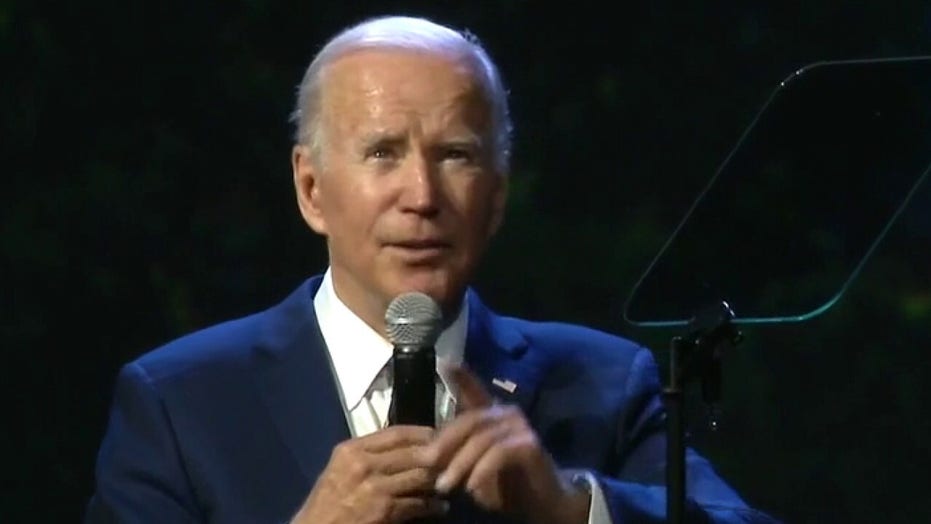 Biden's 'Great MAGA King' jab blows up in his face

'The Five' discuss how president's attempt to slam Trump was embraced on the right.

President Biden ripped Donald Trump by calling him "The Great MAGA King," but the right wing instead embraced the term, while some midterm Democratic candidates hedged on whether they want Biden's support, the panel on "The Five" discussed Thursday.

At a reported $30,000-per-head fundraiser for Democrats, Biden bragged about reportedly decreasing the federal deficit by a record amount, criticizing Trump for instead ballooning it:

"Under my predecessor, the great MAGA king, the deficit increased every single year he was president," Biden said, only days after he branded his opposition "ultra-MAGA."

In response, Trump co-opted the nickname, posting a meme to his Truth Social account depicting him as a sword-wielding monarch from "Lord of the Rings."

On "The Five," host Geraldo Rivera noted that in Ohio, where he lives, the newly-minted Democratic Senate nominee deflected a Fox News question about hosting Biden on the campaign trail – suggesting the president has bigger political issues.

"Tim Ryan, the popular congressman, is running now against [GOP nominee] JD Vance. He doesn't want anything to do with Joe Biden," Rivera said, adding that "when the debate is lost, slander becomes the tool of the loser."

An aide to Ryan also notably rebuffed an invitation by the anti-Trump-Republican Lincoln Project to involve itself in his race.

"So I believe that Biden has such difficulty communicating that even his nicknames [and] smears are ineffective."

Further, host Jesse Watters riffed that Trump being offended by being dubbed "Great MAGA King" would be like him being so if monikered "King FOX."

"I'm sure [Trump social media aide Daniel] Scavino saw this and has like some vicious memes now," he added.

I don't understand where Brandon gets these nicknames. This is a real reach. It's not natural."

He noted that Biden's past attempts at smearing his opponents have similarly backfired, pointing to the Delaware Democrat's attempt to brand opponents of face-masking as having "Neanderthal thinking."

Watters concluded that "MAGA" is a platform bigger than the former president, pointing to people like Virginia Gov. Glenn Youngkin, who embodied "MAGA" ideas without Trump's consistent presence.