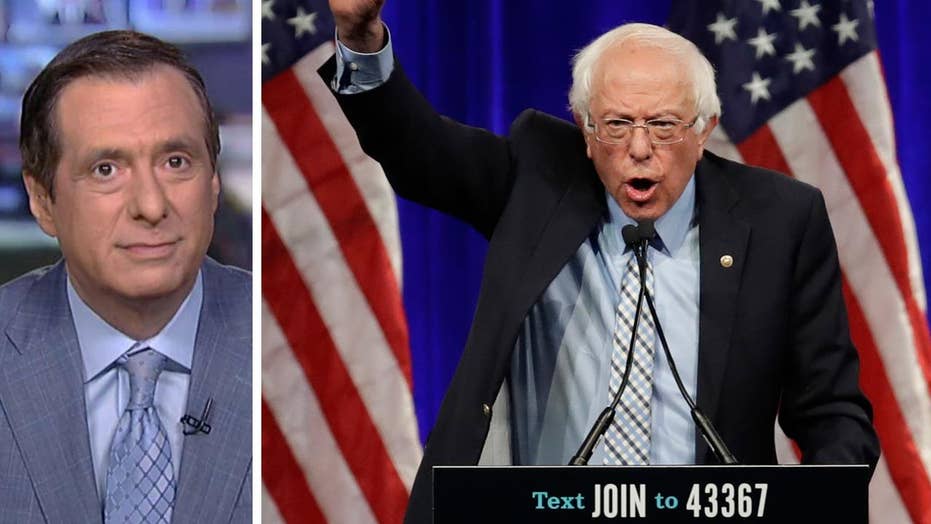 'MediaBuzz' host Howard Kurtz weighs in on why Bernie Sanders is bashing billionaires like Jeff Bezos in a manifesto to 'rescue the media.'

Bernie Sanders wants to save the free press.

The candidate who has been fuming about his campaign coverage is now setting a lofty goal to go along with his plans for free college and Medicare for All. Call it Journalism for All.

Look, it’s nice to have someone care about my struggling profession. And Sanders is explicitly contrasting himself with a president who routinely rails against fake news.

But his methods are rather unrealistic, amounting to just another plank in his anti-corporate crusade.

PAPER SAYS PAST TWEETS SHOULD BE USED AGAINST POLITICOS, BUT NOT JOURNALISTS

In a piece for Columbia Journalism Review, the Vermont senator doesn’t like the fact that billionaires now own some of America’s top newspapers. Of course, mega-wealthy guys, from William Randolph Hearst to Mort Zuckerman, have always owned papers.

But these days, with print publications in deep trouble as victims of the digital revolution, more papers are being snapped up by the rich at bargain prices. These range from the L.A. Times, now owned by biotech kingpin Patrick Soon-Shiong, to the Boston Globe, bought by Red Sox owner John Henry when the New York Times unloaded it at a billion-dollar loss.

And of course there’s the Washington Post, which Amazon founder Jeff Bezos bought six years ago from the Graham family for $250 million.

Sanders happens to believe the Post treats him unfairly, and he blames Bezos. You know who else is perpetually outraged at Bezos and what he dubs the Amazon Washington Post? Donald Trump.

When Post Executive Editor Marty Baron and others proclaimed that Bezos never meddles in newsroom decisions, Bernie backed off, saying his real beef is with “corporate media.”

Now I give Sanders credit for recognizing the magnitude of the problem, such as newsrooms losing 28,000 employees in the last decade while Google and Facebook dominate the online advertising market. Even Gannett had to sell itself to another large chain.

And I get that as a Democrat Sanders is drawing a stark contrast with the incumbent: “Trump’s authoritarian bullying of the media is totally unacceptable and it must be denounced and rejected.”

But his policy prescriptions sound pretty pie-in-the-sky, and his CJR piece devolves into an anti-corporate manifesto:

“Corporate conglomerates and hedge fund vultures have bought and consolidated beleaguered local newspapers and slashed their newsrooms—all while giving executives big payouts…We should not want even more of the free press to be put under the control of a handful of corporations and ‘benevolent’ billionaires who can use their media empires to punish their critics and shield themselves from scrutiny.”

I don’t want a handful of giants controlling what we see and hear either, but you can’t repeal the free market. And given the ailing health of so many newspapers, we should be grateful that zillionaires like Bezos and Soon-Shiong have not just rescued but revitalized some of the country’s top papers—knowing full well they’ll never be profit centers.

There are outlier owners who do use their media properties to protect their empires, but unless Sanders can prove that the mainstream billionaires are wielding their papers as political weapons, he shouldn’t make the charge.

--Taking a tougher stance against media mergers, such as the recent agreement to reunite CBS and Viacom. Okay, but some of these mergers and acquisitions are an attempt at survival, such as Disney’s recent mega-deal in buying Fox’s movie studio and other entertainment assets.

--Requiring major media companies to disclose whether their transactions and merger plans will involve significant layoffs. I detest newsroom layoffs, but one company’s not going to buy another without being able to shrink the combined staff.

--“We will prevent media-related merger and deregulation decisions at federal agencies that adversely affect people of color and women.”  Not quite clear how this would work.

--Boost efforts by media workers to form unions. There’s nothing stopping them from trying to unionize now, as many have, and this sounds like an effort to please labor unions with endorsements to make.

--Toughen antitrust enforcement against such tech giants as Facebook and Google “to prevent them from using their enormous market power to cannibalize, bilk, and defund news organizations.”

It’s true that those companies have eaten their rivals’ lunch, but news outlets are full partners in using social media to promote their stories. It’s a lousy deal for the news folks, but it’s difficult to see the antitrust violations when the biggest media outlets have been ardently trying to collaborate with the likes of Facebook.

I welcome anyone joining the debate about how to preserve an independent press, especially at a time when local journalism is dramatically shrinking. And media concentration is a very real problem. But not even a president can wave a wand and banish billionaires and big corporations from the media marketplace.