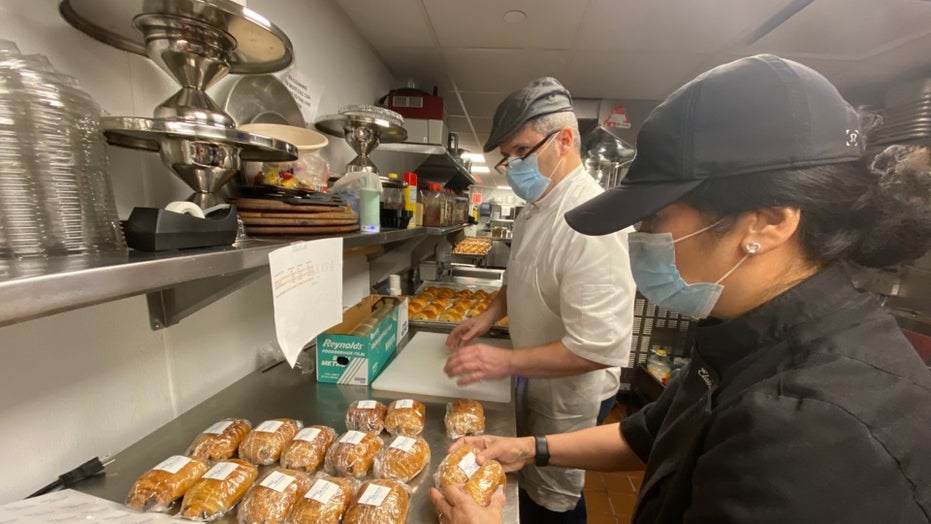 Brooklyn Heights restaurant Estuary is fighting to support the coronavirus relief efforts by providing free meals to overwhelmed hospitals and health care workers, even as revenue hits an all-time low. Danny Brown is Estuary’s Michelin-starred executive chef and Estelle Lau is the deputy CEO of ONE°15 Brooklyn Marina which oversees the business there, and both speak to Fox News about the restaurant’s give-back efforts.

In an exclusive interview with Fox News, Danny Brown, Estuary’s Michelin-starred executive chef, said the restaurant began delivering meals to Brooklyn Hospital in Fort Greene and has since started making meals for The Children’s Hospital at Montefiore in the Bronx.

“We've been delivering breakfast meals on certain days of the week and also dinner meals, anywhere between 200 and 300 meals at a time,” said Brown. “And our loading zone at Estuary has been sort of designated as EMS [emergency medical services] parking, so we feed EMS workers that have parked their ambulances [there].”

Estelle Lau is the deputy CEO of ONE°15 Brooklyn Marina, which oversees Estuary and other local businesses at the marina. She explained to Fox News that they are currently delivering up to 900 meals a week, and have created a makeshift base for first responders.

“On any given day, we have between 15 and 20 first responders that come at the beginning of the day, and then they close out their day and their breaks here,” said Lau. “We provide three meals for them as well, and give them a place to do their paperwork, have clean bathrooms, and be around friendly faces.”

Her team has been working to offset packaging and food costs through its GoFundMe campaign.  Lau also says that while Estuary and the adjacent bakery, Ebb & Flow, have been providing the food, she’s been looking for more ways the marina can help during the crisis. She said the harbor has always been and continues to be a safe one for any first responders in the water. Now, however, they’ve been donating their dockage to first responders who have been coming from out-of-town to help on the front lines of the COVID-19 fight.

“We are now berthing a vessel in the marina, with two ICU nurses and a patient assistant who are working at New York Langone and at Mount Sinai,” said Lau. “We've gotten sailors and our sailing community to help support them by giving them whatever they need for their boats, and they eat for free in our establishment.”

Lau said that everyone in New York City has been impacted by coronavirus in some way and she wanted to step up for the community.

“It's my team, I look at trying to support a company that has lost almost all of its revenue,” said Lau. “I feel responsible as the CEO for the lives of a small group of people, you know, 40, 50 people, and I feel like whatever I can do to support them and their families is super important.”

Family is also something that has been motivating Chef Brown. His wife, Audrey, is pregnant.

“We are looking forward to this new person, she will bring us light in an otherwise dark hour,” Audrey and Danny Brown told Fox News. “It has made our shelter in place a little bit easier to handle because in our heart we are doing it for her, not for us. It is an exercise in selflessness for sure, but I guess that's parenting in a nutshell!”

For more on Estuary and the efforts of ONE°15 Brooklyn Marina in the COVID-19 fight, watch the full video above.