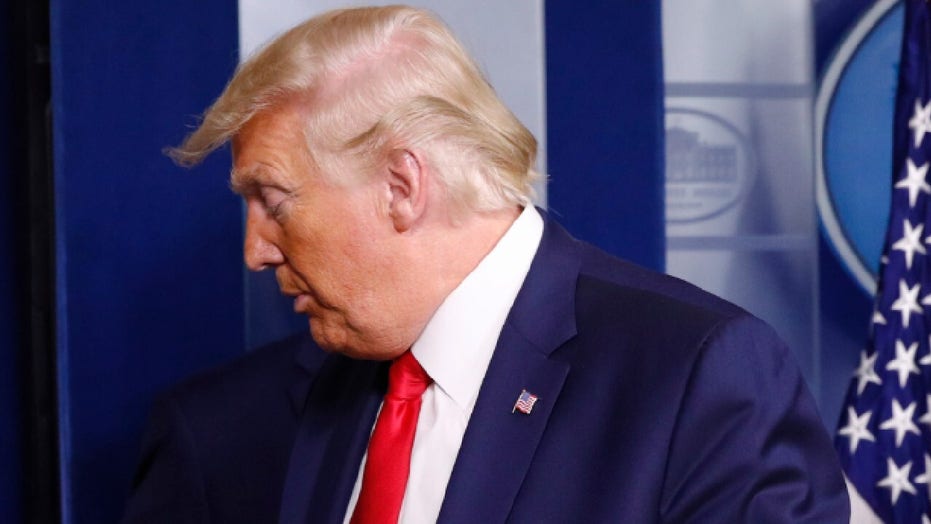 The end of the 15-day 'slow the spread' period may tee up a battle between health and economic officials on what to do next; Kristin Fisher reports from the White House.

It’s not much of a shock to discover that Rachel Maddow doesn’t like President Trump’s daily briefings on the coronavirus.

“I feel like we should inoculate ourselves against the harmful impact of these ongoing false promises and false statements by the president by recognizing that when he’s talking about the coronavirus epidemic, more often than not, he is lying,” she told her MSNBC viewers.

What is rather surprising is what Maddow wants to do about it, an idea that is gaining cachet among other commentators on the left as well.

FORGET THE DEBT: WHY TRUMP AND POLS WANT A TRILLION-DOLLAR BAILOUT

“If it were up to me, and it’s not, I would stop putting those briefings on live TV,” she said. “Not out of spite, but because it’s misinformation.”

Think about that for a second. Some liberals, who ordinarily cast themselves as champions of free speech, now want to suppress speech because of their animus toward Donald Trump.

Yes, Trump would still be able to hold White House briefings, but they would literally pull the plug on live coverage, depriving millions of Americans of the chance to see not just him but the vice president, surgeon general and assorted medical experts.

This is the height of condescension. What they’re saying is that Americans are too dumb to understand that some of what Trump says might be positive spin or factually inaccurate. Only the pundits and the press are smart enough to figure that out, so they will watch the president and then filter what you need to know.

"If the president does end up saying anything true, you can run it as tape,” Maddow allows. But beyond that, “all of us should stop broadcasting it. Honestly, it’s going to cost lives.”

Washington Post columnist Margaret Sullivan, whose writings drip with disdain for Trump and for media people who she believes enable him, says efforts such as fact-checking “don’t go nearly far enough to counter the serious damage this man is doing to the public’s well-being. Radical change is necessary: The cable networks and other news organizations that are taking the president’s briefings as live feeds should stop doing so.”

Just censor him. That’s what the argument comes down to. And what’s revealing is that the people who are making this case have spent years denouncing the president in ever harsher terms. Sullivan recently wrote that Trump is so dangerous that “we need to abandon neutrality-at-all-costs journalism, to replace it with something more suited to the moment.” The larger message is a clarion call for journalists to crusade against Trump, abandoning such niceties as fairness as a luxury we can no longer afford.

The president tweeted Monday that he watches “CNN, MSDNC, ABC, NBC, CBS, some of FOX (desperately & foolishly pleading to be politically correct), the @nytimes, & the @washingtonpost, and all I see is hatred of me at any cost. Don’t they understand that they are destroying themselves?”

I was struck when Trump used that word -- “hatred” -- to describe his media detractors in a 2016 interview with me. While it’s true in certain cases, it is far too broad a brush. And, of course, the president goes out of his way to slam the media as a way of discrediting their legitimate criticism of him.

He did that last week in accusing, without evidence, the New York Times, Washington Post and Wall Street Journal of siding with China on the virus story. He called NBC’s Peter Alexander a “terrible reporter” for pressing him --aggressively, to be sure -- on whether he was offering “false hope” on two unproven drugs and then asking him to address millions of scared Americans.

Stephanie Grisham, the president’s press secretary, told me Sunday on “Media Buzz” that his job is “to try to calm the American people,” and so Alexander’s “false hope” question was “wildly inappropriate.” She called on journalists to “set aside their bias against this president, and they need to do what this White House is doing and show leadership and try to get information to the American public.”

Now I think it’s perfectly fair to point out, as I did in the interview, that Trump spent weeks minimizing the impact of the coronavirus; it’s all on tape. (She disagreed.)

I think it’s perfectly fair to point out that despite his appeals to private business, the president still can’t tell us when the medical system will have enough masks, ventilators and respirators--and that by not invoking the Defense Production Act, he is largely pushing it off on the states.

I think it’s perfectly fair to point out that some of Trump’s claims are contradicted by Anthony Fauci, that some of what he says is overly optimistic, that experts don’t believe things will start improving after the current 15-day period that the president has embraced. In fact, the situation is expected to get worse.

In short, I think that good journalists can hold Trump accountable for what he says and does, or does not do, without bearing a personal grudge -- and recognizing that an ABC poll has approval of his virus management up sharply, to 55 percent.

What I do not think is fair is for television to impose a blackout on the president of the United States because some on the left don’t think the public can handle hearing from him in this crisis.