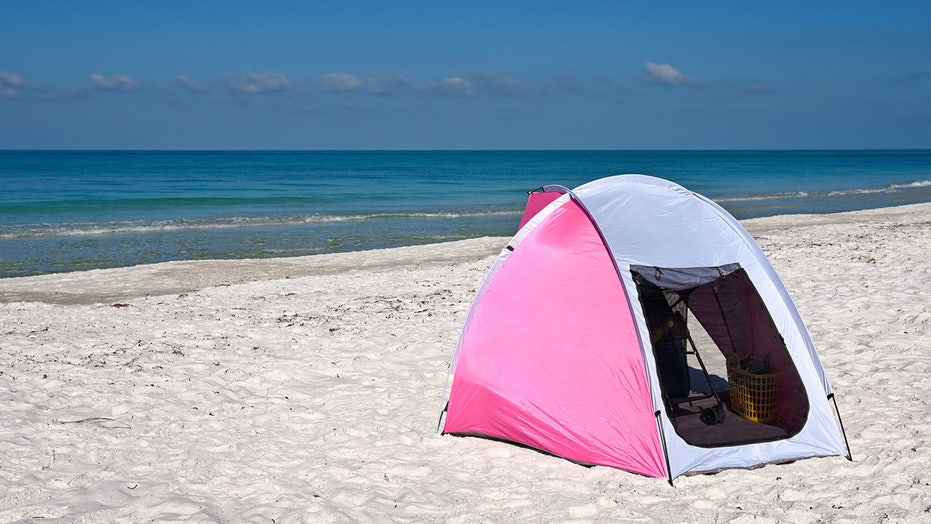 Two YouTube-famous parents from the U.K. are being blasted for leaving their 4-month-old baby alone and asleep in a beach tent while they swam in the ocean with their other children during a family vacation.

Parents Chris and Sarah Ingham have quite the following on the site, with an audience of 1.25 million, where they document their life and times with their daughters Isabelle, 12, Esme, 9, and Isla, 6, and baby son Jace, The Sun reports.

One particular shot from the family’s summer vacation road trip rubbed many the wrong way, however.

In a video published Aug. 5, the Ingham’s highlight their fun in the sun during a trip to the beach in Salou, Spain, the Sun reports, as temperatures hovered around 86 degrees Fahrenheit.

BOY, 6, WEARS SPECIAL SHIRT TO FIGHT BULLYING AT SCHOOL: 'I WILL BE YOUR FRIEND'

After Jace fell asleep for a nap in their baby beach tent, the crew decided to cool off with a quick dip in the ocean — leaving the tot alone.

“So while Jace is strapped in his sleep fast asleep, we’re getting some rare five seconds of family time right now in the sea,” Chris said in the clip, as the couple and their daughters splash around in the crystal blue waters.

The video has since been viewed 116,000 times on YouTube, with the irresponsible stunt leaving many commenters outraged.

“OH. My. God. In the Ingham family's new video they LEFT their baby on the beach while they went swimming in the sea!!!! … Am I missing something here??” one Twitter user wrote online. “It take seconds for someone to snatch that baby.”

“I can’t believe they have left a 4 month old baby alone on a beach... Disgusting behavior!!!” another agreed.

Another described the move as “real stupid,” wondering why the parents “can’t see how dangerous it is” as it “takes all of a few seconds for something to go wrong.”

“How can you even reason with that?” another asked.

Two days later, the firestorm prompted Chris to offer a statement, defending his family and arguing that his baby was never in danger.

"Whilst Jace was asleep and strapped into his sleep chair, which was placed inside a UV baby shade on the shore of the beach. No more than a few feet from where we were cooling off at the sea edge,” he told the Sun. “Myself, my wife Sarah and our girls - Isabelle, Esmé and Isla cooled ourselves off together in the sea at the waters edge.”

"This footage included in our video - which is where the 'outrage' is coming from - was also filmed on a wide angle camera lens which as you should know - distorts distance and makes things look much further away from the camera than they actually are,” he continued. “"We were in the water for no more than a few minutes together - Jace was in complete sight the entire time. We never took our eyes off him at any point.”

"There was absolutely no instance where Jace was 'left on his own in a tent on the beach,’” the dad argued. “And at no point was there any danger or neglect of Jace what so ever.”

Some fans of the family, meanwhile, didn’t think the parents of four deserved to be criticized so harshly for their actions.

“Breaks my heart seeing the Ingham family get hate and bullies being so vicious and abusive to them I think they are incredible people… these bullies need to stop as it has an impact” one Twitter user said.

Another agreed that the parents were “just trying to live their best life” and didn’t deserve the backlash.

The Ingham family did not immediately return Fox News’ request for comment on the story.

Nevertheless, this isn’t the the first time that the couple has caused a stir with their parenting practices.

Last week, Chris and Sarah were slammed for selling a replica doll of Jace, which they claimed led some video subscribers to call child social services on them for the questionable behavior, the Daily Mail reports.