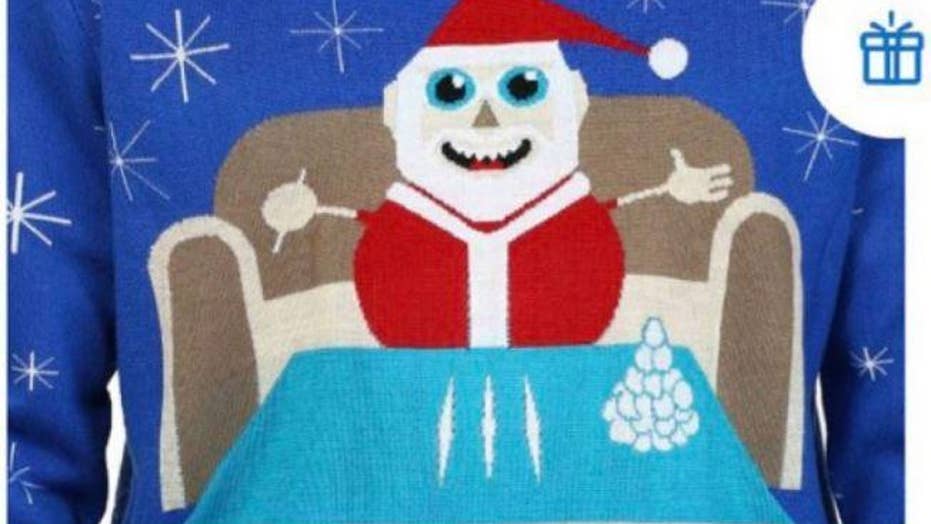 Walmart is saying sorry for an 'ugly' Christmas sweater that appears to depict Santa doing cocaine.

Walmart has issued an apology for an "ugly" Christmas sweater that was recently featured on its Canadian website, as it appeared to depict Santa doing cocaine.

To really drive home the point that Santa was engaging in an illicit act, the sweater, which was reportedly sold by a third-party seller FUN Wear, the clothing brand added a lengthy description stuffed with overt nods to cocaine. (Walmart)

The adult-themed holiday sweater featured a deranged-looking Santa Claus holding what appears to be a straw in one of his outstretched hands, and sitting in front of three lines of a white substance, alongside some snowballs.  The phrase  “Let It Snow” is also printed near the bottom of the sweater.

To really drive home the point that Santa was engaging in an illicit act, the sweater — which was marketed on Walmart.ca under the third-party seller FUN Wear — was accompanied by an incredibly lengthy description stuffed with painfully overt nods to cocaine.

“We all know how snow works. It’s white, powdery and the best snow comes straight from South America. That’s bad news for jolly old St. Nick, who lives far away in the North Pole,” the product description read, according to a screenshot posted on Twitter.

“That’s why Santa really likes to take savor the moment when he gets his hands on some quality, grade A, Colombian snow.”

Walmart has since pulled the sweater from sale and issued an apology.

“These sweaters, sold by a third-party seller on Walmart.ca, do not represent Walmart’s values and have no place on our website,” a spokesperson told Fox News in a statement. “We have removed these products from our marketplace. We apologize for any unintended offense this may have caused.”

However, despite Walmart apologizing for the sweater due to alleged backlash, those on Twitter seemed more upset by its removal from the website.

One person even posited that the illegal stimulant was how Santa managed to deliver all of the presents “in one night.”