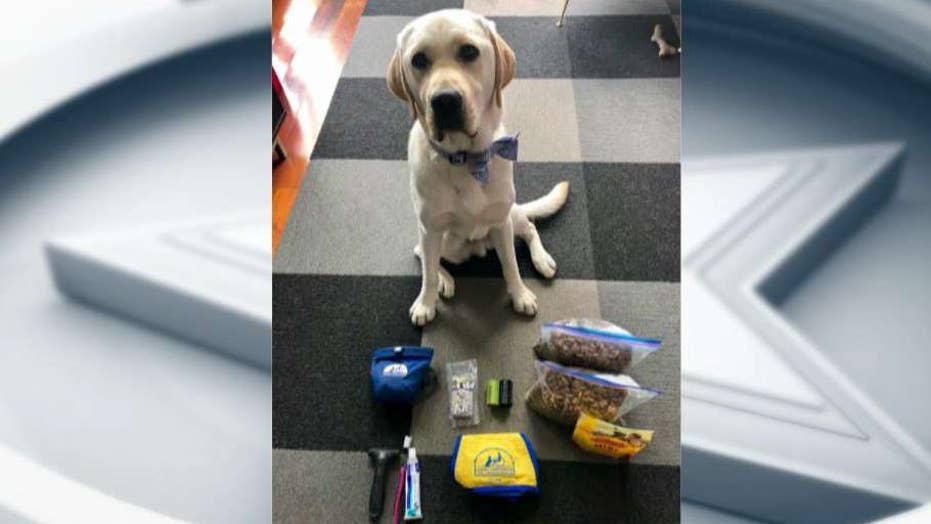 Dog-sitting do's and don'ts for Dana

Dana and Peter will be dog sitting Spike for the first time.

Spike goes everywhere with me. But there are some challenges where I need to go it alone.

I was diagnosed with thyroid cancer last year which led to the removal of my thyroid. I wrote about that experience and how little puppy Spike helped me through it.  While there doesn’t appear to be any progression of the cancer, there are a few lingering issues and my doctor recommended a low dose of radioactive iodine - or what she calls ‘peace of mind’ radiation.

Spike has a pretty regimented training program that he and I follow for Canine Companions for Independence. These guidelines are adhered to by all the puppy raisers around the country. If we ever need a puppy sitter, we just ask a fellow Canine Companions puppy raiser to help out. (Jennifer Williams)

I’m all for peace of mind. To prepare for the treatment, I have been on this difficult low-iodine diet. Turns out iodine is in everything tasty which is a bummer. But I’ve lost nine pounds in two weeks which is decidedly not a bummer.

A big downside to this procedure is that after receiving the radiation treatment, I can’t be in close contact with adults for any significant time and I can’t be around children or pets. This is because for the next few days I’m going to be slightly radioactive. Awesome!

So in my biggest time of need, I can’t be around Spike which stinks. But it’s always good for Spike to work on his commands and training with someone else, so he knows that no matter who is talking to him, he needs to listen.

Spike has a pretty regimented training program that he and I follow for Canine Companions for Independence. These guidelines are adhered to by all the puppy raisers around the country. If we ever need a puppy sitter, we just ask a fellow Canine Companions puppy raiser to help out. I’ve always done this… until now.

Dana Perino, the world's biggest dog lover and anchor of The Daily Briefing, has generously offered several times before to take Spike when something comes up. I must admit I was hesitant when Spike was younger, because she didn’t know the program. But also because Jasper, Perino’s dog, has VERY different rules from Spike. He’s a couch and bed dog - but Spike is not allowed on any furniture. Now that Spike is older he knows that it’s not OK for him to jump up on the couch, even when he sees a civilian dog doing it.

Spike and I have now spent many hours with Dana and her husband Peter and Jasper, including several overnights. They have been keenly interested and involved in Spike’s training since day one. They clearly have an understanding of the expectations and are disciplined dog owners and trainers. Have you ever read her book “Let Me Tell You About Jasper!?”  (You should if you have not already.)

So I think Dana is now ready for her first ever Canine Companions for Independence puppy-sitting job.  But there are a lot of rules and I had to get Canine Companions’ permission to let a non-puppy raiser take care of him. They of course recognized Dana’s competence and commitment and said yes. Phew!

There is a form that we give to all puppy sitters to fill out about their time with the dog which I’ll ask Dana and Peter to fill out. I also thought it would be helpful to spell out some stuff, more or less a cheat sheet for Dana and Peter. I’m sharing this cheat sheet in that it may help people understand what is entailed in raising a puppy for Canine Companions -- and perhaps give some ideas for those out there raising “civilian” dogs.

Dana Perino, the world's biggest dog lover and anchor of The Daily Briefing, has generously offered several times before to take Spike when something comes up. I must admit I was hesitant when Spike was younger, because she didn’t know the program. But also because Jasper, Perino’s dog, has VERY different rules from Spike. (Jennifer Williams)

When leaving your dog with a sitter, you want to make sure to leave pertinent information such as your contact number as well as the full name, address and phone number of your dog's vet. If your vet does not take emergency calls, you also want to leave a 24/7 emergency hospital number and address just in case.

Other details you will want to include:

Spike eats about three cups of food per day. He eats twice a day, and gets a healthy cup in the morning and evening. He’s used to a 6:00 am breakfast but knows on the weekend he may have to wait until 8 or so.  He eats dinner around 5:30 pm on weekdays, but can go a little later on weekends (aka Jasper-time).

He has to wait for you to say “OK” before eating. Put the bowl of food down and if he starts trying to eat it pick it back up and say “Don’t.” He knows the rules! I usually wait anywhere from 5  to 30 seconds.

I go through about another cup of his kibble throughout the course of the day to treat him as a reward - hence the three cups total of food.

You can also mix in the treats i included as rewards. But no human food whatsoever.

NOTE: This is important so your pet sitter knows what to expect and can make sure your animal is not stressed about toileting on top of being in a new environment. It will also help the pet setter flag you if something is abnormal

Spike always pees and poops on his first walk in the morning.

I try to make sure he goes out every four hours, but he can hold it longer if needed.

I included his brush as he sheds a lot. He loves being brushed and usually sits or lies down while doing it.

I also included his toothbrush and toothpaste. If you remember to brush his teeth once or twice, great. More than anything its good that he lets someone other than me brush his teeth if you have time.

Make sure Spike walks nicely on a loose leash right by your side - not far ahead and not far behind.

Spike should be calm and confident in a variety of situations, including meeting new humans and dogs.

Spike should wait calmly by your side if someone comes to the door - he shouldn’t bolt for it.

Give lots of praise - and treats - for doing things right.

Never off leash outside where it’s not fenced it

No jumping up on furniture, chairs, beds

No jumping up on people. Turn your back or ignore him and say “don’t.”

No humping! If he starts humping anyone (which he recently picked up from a small Frenchie in San Francisco) pull him off the dog and say “don’t”

No picking up food or trash off the ground/sidewalk

I’m giving Dana and Peter an abbreviated list of Spike’s commands. I picked the easiest ones for him so there shouldn’t be any issues.

DOWN - make sure his belly hits the floor

SHAKE - put his paw in your hand. He’ll do either paw.

SPEAK - aka bark, and he should just bark once. He loves doing this now that he’s finally found his voice.

HURRY - this means to pee. While you don’t need to use this command before he pees, if you say “good hurry” after, it reinforces the command.

RELEASE - this means he’s totally free to do what he wants.  So if he’s on leash, or in a command and then you let him play with Jasper, tell him release first. Or, say you’re walking him on leash and someone approaches to say hi, first put him in a ‘sit’ (to put him in command-mode) then say “release” so he’s able to receive his affection.

DON’T - this means “no”, stop doing whatever you are doing

Spike is beyond excited to spend the whole weekend with his buddy Jasper - and now Dana and Peter are prepped and ready for their first Canine Companions puppy-sitting gig. Good luck guys!