Exactly three weeks ago, I woke up in Lenox Hill Hospital in a post-surgery recovery room. It took me a while to figure out where I was and how I got there.

Oh yeah, I have thyroid cancer.

I had just undergone a 4-plus hour surgery to remove my entire thyroid.

I looked at the first nurse I saw and asked for Chris, my boyfriend, but my throat was so sore and dry nothing really came out, so I loudly whispered “Where’s Chris?” He and my dear friend Amy came into the recovery room with the biggest smiles on their faces. We hugged and kissed and I motioned to Chris to come closer, and whispered in his ear, with a post-anesthesia slur, “Spike...  Blog….  Did Spike blog post??”

I kid you not. I was behind in getting my blog post to our digital team and wanted to make sure it posted. Chris said it did, and I asked him to pull it up on his phone, as I hadn’t seen the final edit of me teaching Spike his name, which I recorded the night before the surgery. 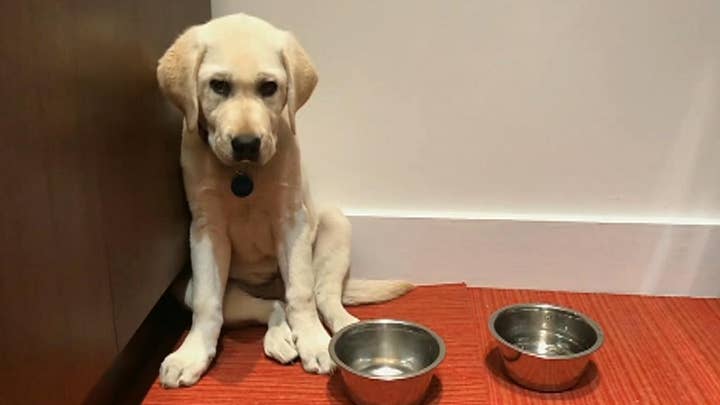 THE DAILY SPIKE: HOW A CANINE COMPANIONS DOG SHOULD RESPOND TO ITS NAME

I had only started the blog a couple weeks prior at the suggestion of our very smart and talented digital team. At first, I was like, “I barely have time in my life to raise this puppy, let alone write a blog about it!” But then I thought it would be foolish to pass up this opportunity to share news of Spike and Canine Companions for Independence’s mission with a larger audience. It’s an amazing organization that provides assistance dogs for persons with disabilities, free of charge. I’m raising Spike in honor of my late brother Kyle, who died from complications of his paraplegia.

Spike, who Williams is raising in honor of her late brother Kyle, is being trained to aid persons with disabilities.

But shortly after getting everyone on board to launch “The Daily Spike,” I was diagnosed with thyroid cancer.

The C word: very scary. I would soon learn, if detected early, thyroid cancer is very treatable. Still, it’s cancer; it has the possibility of spreading, and it is the last thing anyone needs. My doctor showed me how the cancerous node on my thyroid already had some calcification on it where the cancer had done some damage. He also saw that it was growing out of the thyroid into my neck muscle — not a good sign. He wanted it out ASAP.

We set the date for the surgery for just over two weeks after the diagnosis.

It was a tough two weeks, running a gauntlet of doctors’ appointments, X-rays and blood work while producing “The Daily Briefing with Dana Perino” and taking care of Spike. Everyone at Fox was incredibly supportive, of course. Spike and I continued to do our thing. Sometimes I would pause and start to cry and Spike would get very concerned. Even at such a young age, dogs know when something is wrong with their human, and that they are to be on their best behavior.

THE DAILY SPIKE: TIPS FOR HOUSETRAINING YOUR PUPPY

The night before the surgery, I thought about the dozens of procedures that my brother Kyle went through as a paraplegic. I thought about the months he had spent in the hospital with various ailments, and the courage he always exhibited whenever a new health issue cropped up. While he could be downright cranky, depressed, and upset about his situation, he generally showed grace and strength in the face of far greater problems than I was currently experiencing. I thought about how a service dog like Spike could have helped him.  But my brother Kyle always said he didn’t need one. He said someone else was worse off than him, and needed a service dog more than he did.

I carried Kyle’s spirit into Lenox Hill Hospital the morning of the surgery. The surgeon said it would be take three hours (it ended up being just over four), and it was still just scary to think about what could happen, despite my surgeon’s impeccable reputation. In the operating room, they pinned my arms straight out on an intimidating cross-shaped table, then put in IVs and all sorts of stuff. The kind anesthesiologist asked me, “So, what helps you relax? What kind of cocktail would you like here?” To which I promptly said “Champagne! No, Rosé! No, wait, rosé Champagne!” And those are the last words I remember before drifting off into that rosé Champagne wonderland.

The next week involved a lot of recovery and naps, and friends making me meals and walking Spike for me, and sometimes just sitting with me while I got sad. It’s a lot to go through, even if my cancer was a "kindergarten" cancer, as a friend called it. This stressful recovery week unfortunately coincided with a vigorous three-night attack of diarrhea for Spike. He got me up a few times each night — midnight, 2 a.m., 4 a.m. — which left me beyond tired. The thyroid regulates your metabolism and the replacement medication takes a while to work itself out. So now, as I feel I can safely say, puppy diarrhea on top of thyroidectomy recovery stinks.

THE DAILY SPIKE: TIPS FOR CRATE-TRAINING YOUR DOG

I went to see my surgeon last week to get all the results back from the surgery and biopsies. And the news is all good: No cancer in the lymph nodes, and apparently no need for the radiation treatments that are often a second step after this procedure. As the doctor and I talked about routine next steps, I felt this wave, this weight being lifted from me. I got out of the doctor’s office and onto 58th street and just started sobbing like I haven’t in a while.

Not today, cancer. Not today.

A good thing about this experience is the time I got to spend at home with Spike as I recovered. It was such a beautiful, sweet unexpected gift to see him grow a bit and learn new commands, stuff he might need in his future job as a service dog. His sweet puppy face, with eyes that just gushed with love, helped me in my recovery, which was likely just a fraction of the obstacles that some people with disabilities go through.

As Kyle said about himself: Someone somewhere is worse off than I am.  And someday they will have this caring, loving, sweet Labrador retriever ready to help and love. And that means everything.