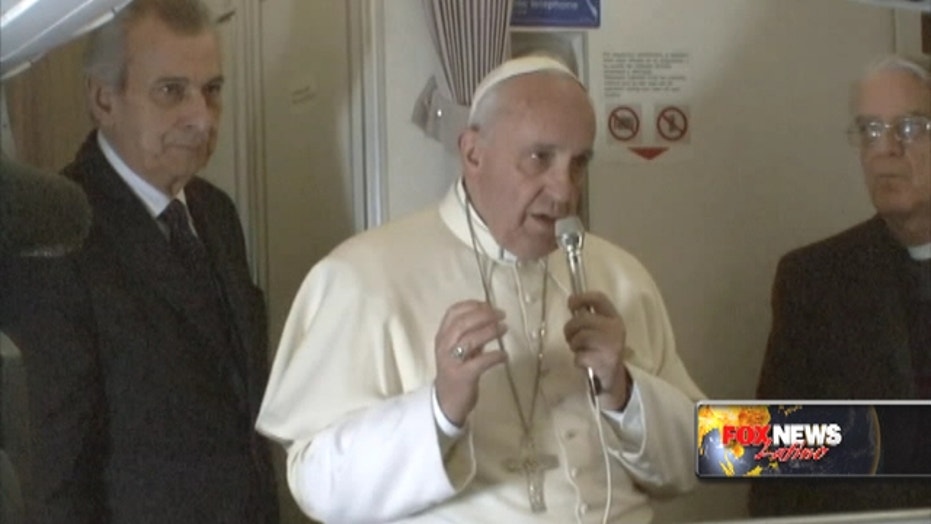 ABOARD THE PAPAL PLANE (AP) – Pope Francis is firmly upholding church teaching banning contraception, but said Monday that Catholics don't have to breed "like rabbits" and should instead practice "responsible parenting."

Speaking to reporters en route home from the Philippines, Francis said there are plenty of church-approved ways to regulate births. But he said most importantly, no outside institution should impose its views on regulating family size, blasting what he called the "ideological colonization" of the developing world.

African bishops, in particular, have long complained about how progressive, Western ideas about birth control and gay rights are increasingly being imposed on the developing world by groups, institutions or individual nations, often as a condition for development aid.

"Every people deserves to conserve its identity without being ideologically colonized," Francis said.

The pope's comments, taken together with his defense of the Catholic Church's ban on artificial contraception during the trip, signal that he is increasingly showing his more conservative bent, which has largely been ignored by public opinion or obscured by a media narrative that has tended to highlight his populist persona.

On the trip, Francis gave his strongest defense yet of the 1968 encyclical Humanae Vitae, which enshrined the church's opposition to artificial birth control. He warned against "insidious attacks" against the family — a reference to gay marriage proposals — echoing language often used by overwhelmingly conservative U.S. bishops. And he insisted that "openness to life is a condition of the sacrament of matrimony."

At the same time, however, he said it's not true that to be a good Catholic "you have to be like rabbits." On the contrary, he said "responsible parenthood" requires that couples regulate the births of their children, as church teaching allows. He cited the case of a woman he met who was pregnant with her eighth child after seven Cesarean sections.

"That is an irresponsibility!" he said. The woman might argue that she should trust in God. "But God gives you methods to be responsible," he said.

He said there are many "licit" ways of regulating births that are approved by the church, an apparent reference to the Natural Family Planning method of monitoring a woman's cycle to avoid intercourse when she is ovulating.

During the Vatican's recent meeting on the family, African bishops denounced how aid groups and lending institutions often condition their assistance on a country's compliance with their ideals: allowing health care workers to distribute condoms, or withdrawing assistance if legislation discriminating against gays is passed.

"When imposed conditions come from imperial colonizers, they search to make people lose their own identity and make a sameness," he said. "This is ideological colonization."