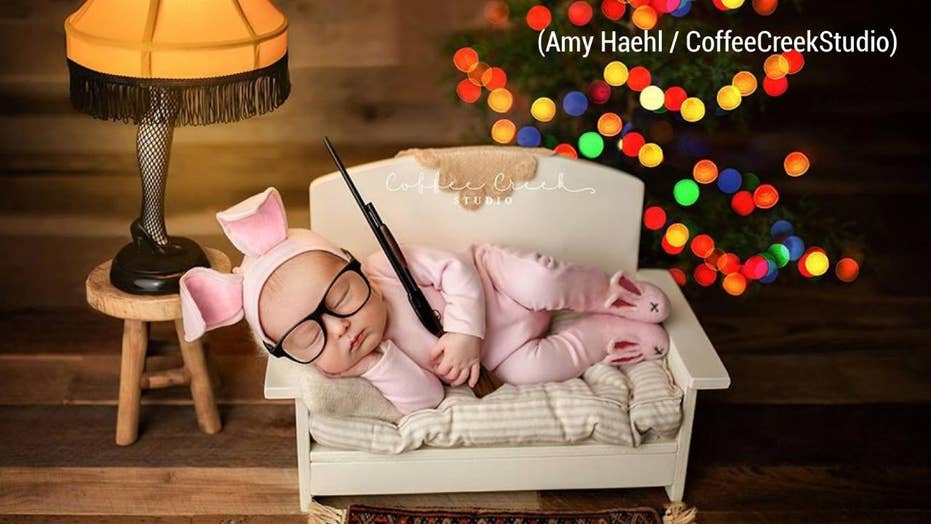 Photo of baby with a replica gun ignites debate

After photographer Amy Haehl posted a photo of a baby holding a BB gun in homage to ‘A Christmas Story,’ some of her fans spoke out, igniting a debate about gun culture.

Though the Christmas season is still a few weeks away, some Facebook users are getting fired up over one Indiana photographer’s “A Christmas Story”-themed portrait session, starring a sleeping baby boy posed with miniature, replica BB gun.

On Nov. 6, Amy Haehl of Coffee Creek Studio shared a photo to Facebook of the snoozing tot outfitted in the iconic pink bunny suit from the 1983 hit flick. Fast asleep by a Christmas tree and the iconic Leg Lamp, the youngster holds the faux weapon propped up in his arms.

“Only 49 days until Christmas!! Ralphie loved his pink bunny suit I had made for him!” the Shelbyville photographer wrote in a post that has since gone viral with over 2,000 likes and nearly 600 comments. “Disclaimer - the BB gun is made of wood to ensure that he did NOT shoot his eye out during the creation of this photo.”

Despite Haehl’s disclaimer, some social media commenters found the picture to be less than funny.

“Will now unfollow you. Who the hell would take a picture of a baby and a gun just for money. Such a waste since you are so talented. Think hard about your lack of principles,” one critic wrote in a since-deleted comment.

“Also unfollowing and unliking you. Extremely distasteful…. Guns are never 'cute', not even as a prop or movie reference. Disgusting. The gun culture in this country is a disgrace,” another agreed. This comment has also been deleted.

Meanwhile, Haehl said she never intended for the photos to be offensive or encourage gun violence in any way.

“Of course I know in the world we live in I was taking the chance that someone would be offended, and I definitely did take that into consideration while still creating a photo with the perfect details,” she told Yahoo Lifestyle. “I know there have been a few comments made in regards to gun violence, and this photo is in no way meant to encourage gun violence or offend anyone who has been affected by gun violence.”

“This photo is not about a baby posed with a 'gun'… it is about love, tradition, family, and happiness,” she continued with a statement on her Facebook page. “['A Christmas Story'] has encouraged smiles, laughter, and happiness for 35 years. It also happened to be filmed right here in the midwest where I was born and raised."

Fans of the image rushed to defend Haehl’s work, saying that the picture put them in the “Christmas spirit” as she recreated a “fond memory” of a classic film.

“Don’t listen to the ridicule - society is becoming too easily offended!!” one wrote.