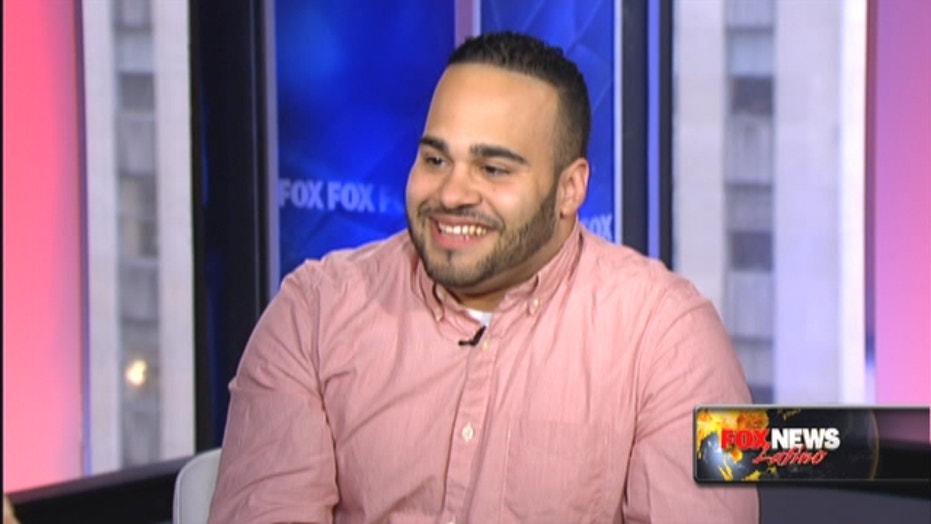 What's the biggest difference between cooking in a restaurant kitchen and cooking on a Food Network competition?

Sure a chef at a restaurant has to deal with multiple orders, demanding customers and an ever changing menu, but that's nothing when it comes to working against the time constraints, unfamiliar territory and egos that one faces when going up against celebrity chefs in front of a studio audience.

"Nothing compares with the pressure you have on a show," New York City-based Chef Kelvin Fernandez told Fox News Latino. "When you get in the arena, your mind goes blank and you either step up or fall short."

Fernandez, the 29-year old Harlem-born executive chef of La Marina restaurant in New York City, knows a thing or two about handling that pressure. Under the bright lights of the TV kitchen, he beat the infamous Bobby Flay on the Food Network's aptly named "Beat Bobby Flay" by serving up a his signature crispy Arepa with steak, lime scented sour cream, creamy guacamole, pico de gallo and Cotija cheese.

I became fascinated by making people happy with something I had made...And that is still what drives me today.

After impressing judges, actress Alison Sweeny and Food Network host Sunny Anderson, with a shitake mushroom pasta with fried egg yolk to best California-based Chef Chris Kobayashi in the show's first round, Fernandez went on to the final's to face off against a feisty Flay, who Fernandez said was still smarting from his defeat to the New York cook in the show's original pilot episode (which never aired on television).

"He remembers everyone who has beat him," Fernandez said, adding that he originally bested Flay with a dish of pasta carbonara with fired egg yolk.

The second time Fernandez beat Flay wasn't without its screw-ups (his first batch of arepas fell apart), but the chef said that he fought through and stuck to what he knew best.

"My heart fell to my stomach," Fernandez said of the disastrous first batch of arepas. "But when it comes down to it, you have to do something that you know how to cook."

Fernandez's win over Flay has made him the darling of New York’s culinary scene, where he is a favorite chef of celebrities such as Dascha Polanco, John Legend and 50 Cent.

Not bad for a Dominican kid from Harlem who only started cooking because his high school sweetheart forced him to take a culinary class.

"I was a complete and total jock in high school and didn't even think about picking up a knife," said Fernandez of his time playing football, baseball and wrestling at Long Island City High School in Queens. "My girlfriend at the time got me to take a culinary class with her so we could spend time doing something that she enjoyed."

The passion for cooking, however, seemed to come alive after Fernandez saw people enjoying his food and he began to take the family craft (his father is a chef) more seriously, eventually enrolling at the prestigious Culinary Institute of America (CIA) in Hyde Park, NY. From the CIA, Fernandez went on to become the executive chef of the STRAND American Bistro in New York City's Fashion District and was named one of "30 under 30" in food and wine Forbes magazine for 2015.

"I became fascinated by making people happy with something I had made," he said. "And that is what still what drives me today."

Now, however, as the executive chef at La Marina, Fernandez has been able to embrace his Dominican roots and meld traditional Latino ingredients with today's fashionable tastes (think tuna tartar with a sriracha aioli on tostones).

"I hadn't started cooking Latino food until about two years ago when I opened my restaurant," Fernandez said. "Right now I have to go with Latino roots because that is what works for me and that is where my heart is."