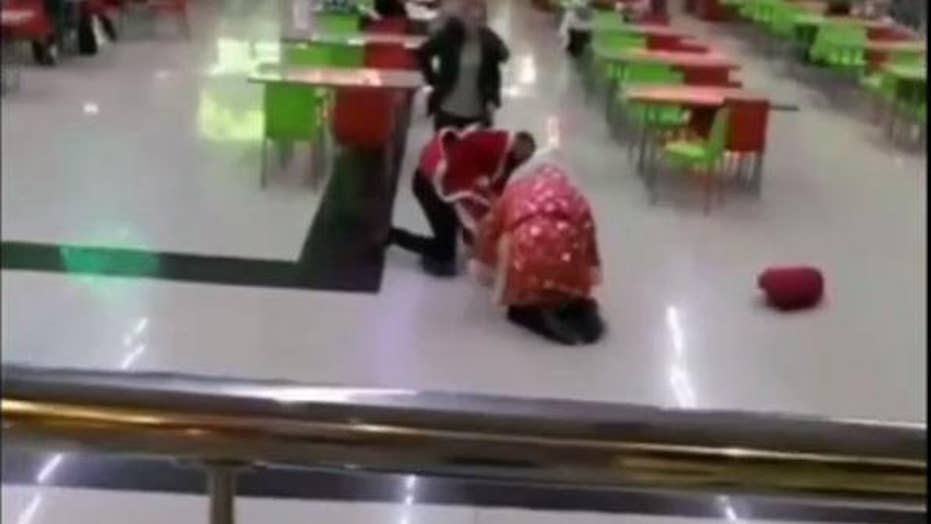 WATCH: Two men dressed as Santa get into a scuffle inside a Russia mall.

Shocking footage shows two men dressed as Santa Claus fighting each other in the food court of a mall in Russia. Even worse, children appear to be present and watching the festive altercation.

One of the Santas can be heard saying, “This is my territory.” The two men then came to blows in the middle of the eatery. (East 2 West)

The incident occurred at a mall in Blagoveshchensk, Russia, The Sun reported. It’s unclear what exactly sparked the fight, although it appears it may have been a case of a professional dispute.

One of the Santas can be heard saying, “This is my territory.” The two men then came to blows in the middle of the eatery.

As the two men rolled around, a shocked young girl can be heard asking, "Mom, are they drunk?” Fortunately, a woman stepped in and broke up the two Saint Nicks.

Another witness reportedly described the incident as a “mafia-style territorial dispute.”

After everything calmed down, the two men claimed that the fight had simply been a joke, The Sun reported.

Elsewhere in the world, a mall in British Columbia, Canada, kicked off the Christmas season by firing Santa Claus.

After working as a mall Santa last year, Gary Haupt was ready to step back into Saint Nick’s shoes for the holidays. But after sharing some personal and provocative photos of himself as Santa jokingly fooling around with a friend on Facebook, Haupt, too, found himself on the naughty list.