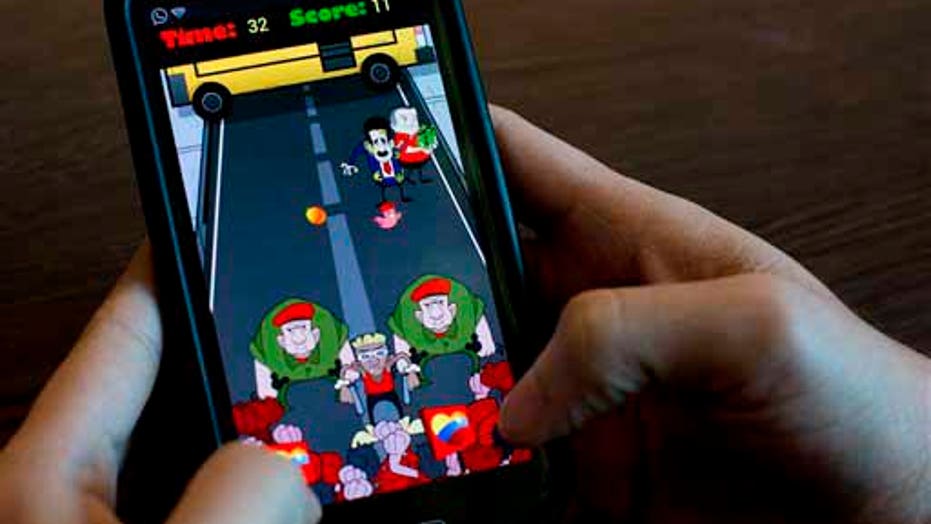 A mobile game app inspired by Venezuelan President Nicolas Maduro having a mango hurled at him during a public event has been downloaded thousands of times.

CARACAS, Venezuela (AP) – Two Venezuelans who emigrated to escape the country's economic woes are drawing laughs with a mobile game mocking President Nicolás Maduro for his decision to give a new home to a woman who threw a mango at him seeking attention for her plea to get housing.

The goal of "Maduro Mango Attack" is to accumulate points by throwing tropical fruit at the socialist leader as he scurries across the screen to a techno beat interspersed with calls by a prominent opposition leader to unleash their fury.

Players are also rewarded for pelting National Assembly President Diosdado Cabello strutting with a bag full of dollar bills and for hitting the late President Hugo Chávez incarnated by a small bird in a red beret — an allusion to Maduro's remarks on the campaign trail that Chávez had visited him in fluttering form.

In the week since the game's debut, more than 10,000 people have downloaded the free app, according to Google Play, the online store for gaming apps.

The game was inspired by an incident last month in which a woman hurled a mango at Maduro's head as he drove a bus through a crowd of supporters. Hours later on national TV, Maduro displayed the mango where Marleny Olivo had scrawled her phone number and then he granted her plea for a new home.

Shoes, pies and eggs remain the most popular objects to throw at scorned politicians the world over. But the projectiles being tossed at Maduro come entirely from supporters and the president initially welcomed the trend, joking April 28 that "it's the time of the mango" and, much to the chagrin of his bodyguards, encouraging supporters to hand over fruit with their requests for the government's help.

However, more recently he has tried to put a damper on the practice. "You have to be careful, comrade," Maduro said at a May Day rally after dodging a weighted-down T-shirt. "Sometimes an expression of kindness can turn into something it isn't intended to be."

Fernando Malave, one of the game's creators, said he doesn't want to encourage violence against the president but rather is using humor to draw attention to Venezuela's problems. Malave said he and the game's co-creator, Gabriel Díaz, moved to Argentina seeking work last year, fed up with high crime and poor job prospects amid an economic crisis marked by soaring inflation and widespread shortages.

The troubles have eroded support for Maduro by nearly half since he was elected president in 2013, putting his backing at 28 percent in an April survey by local pollster Datanalisis.

"People are tired and everyone wants a change but don't know what kind of change," Malave said. "Hopefully humor, which has always united Venezuelans, can relieve some of the daily stress."