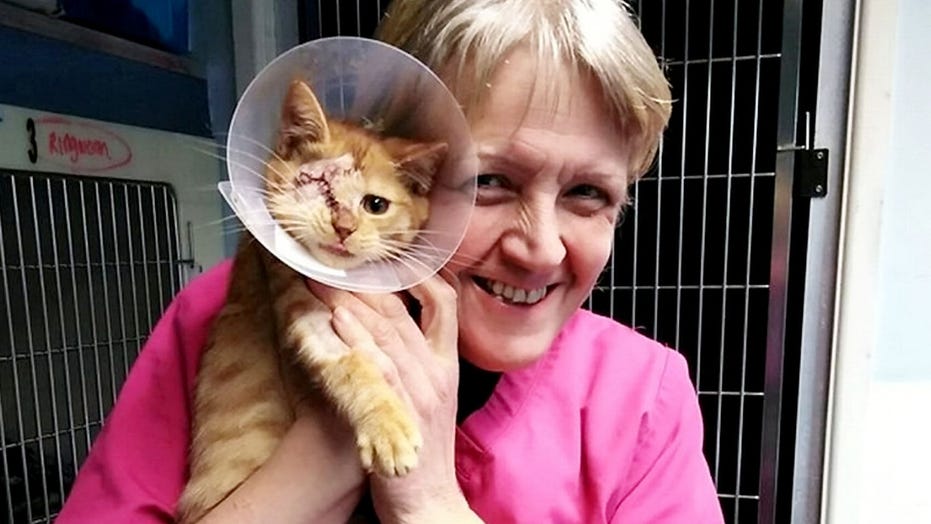 A small cat in the UK barely survived after being attacked by a fox or other large predator.

An animal care facility in England shared photos of the kitten who lost an eye after the incident. The photos show the tiny animal with a large scar covering one of its eyes.

“Tango was brought in to us six weeks ago after his litter was attacked by a weasel or fox," explained the shelter's founder Leanne Kent, "three were sadly killed and Tango arrived with his brother Cash." (SWNS)

Clay County Cat Care in St Austell is raising money for the kitten’s surgery, SWNS reports. The cat, named Tango, was one of only two survivors of a supposed fox attack. Two of Tango’s siblings reportedly did not survive.

WOMAN CLAIMS DOG WAS CRUSHED TO DEATH DURING PETSMART GROOMING APPOINTMENT: 'SHE WASN"T JUST A PET'

The shelter’s founder, Leanne Kent, explained, “Tango was brought in to us six weeks ago after his litter was attacked by a weasel or fox, three were sadly killed and Tango arrived with his brother Cash. There were five originally but three were killed and dragged out in the cow yard.”

She went on to explain Tango’s injuries, saying, “Tango had substantial damage to his eye when he arrived and he has been under treatment since.” She continued to explain that they initially tried to save the eye, but the cat was in too much pain and they decided that the eye needed to be removed “as soon as possible.”

After the operation, Kent provided an update, saying, “His operation went really well and he is now recovering with a fluffy new blanket. I’ve been informed by Rock View Vets he is rolling around asking for belly rubs, this news makes me smile and for me to know that all this hard work we as a rescue put in is worth every scar, smile, tears, heartache and joy."