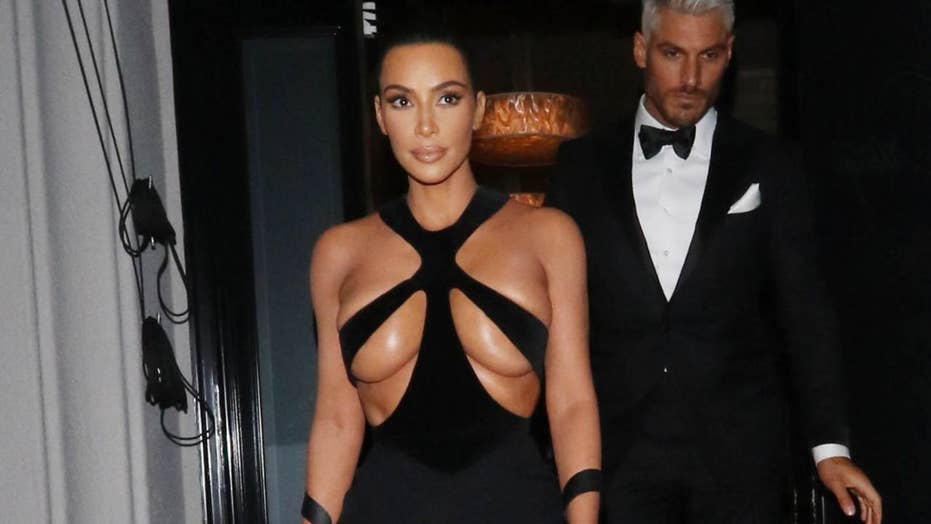 Reality star Kim Kardashian risked a serious wardrobe malfunction, donning a vintage Thierry Mugler gown to the Hollywood Beauty Awards. The dress, from designer Mugler's summer 1998 collection, covered little more than her nipples and sternum as she rocked some serious cutouts on the bodice.

Kim Kardashian may be a marketing genius, but her latest social media gimmick was pretty creepy.

The beauty mogul, 38, is celebrating the launch of her collaboration with eyewear brand Carolina Lemke by gifting influencers with masks made from scans of her own famous face.

Kardashian sent a box with three masks — and three matching pairs of sunglasses — to famous friends and family including Kimora Lee Simmons, Kourtney Kardashian and Kris Jenner, who all posed for photos looking like KKW clones.

“I think I look beautiful,” Kourtney said in her Instagram Stories while wearing the mask and sunglasses. “My Face ID isn’t working on my phone, though.”

Apparently, Kardashian’s kids North, 5, and Saint, 3, love to play with the masks as well. “North and Saint keep putting the masks on and wearing them all over the house trying to scare people. They think they’re the funniest things,” the reality star told Elle. “They think they’re in on some amazing prank.”

Past marketing stunts by KKW include sending Valentine’s Day-themed perfume to all of her “haters,” like Bette Midler and Taylor Swift. The “Purge”-style masks are an extension of her Carolina Lemke ad campaign, which features Kardashian with knee-length hair extensions and an army of clones clad in identical black bras, underwear and tights.

The collection officially dropped on Tuesday, with four styles in various colorways retailing for $90 each. However, there are more on the way — Kardashian revealed to Elle that she was originally supposed to stick to six styles, but loved working with the brand so much that she’s created more than 20.