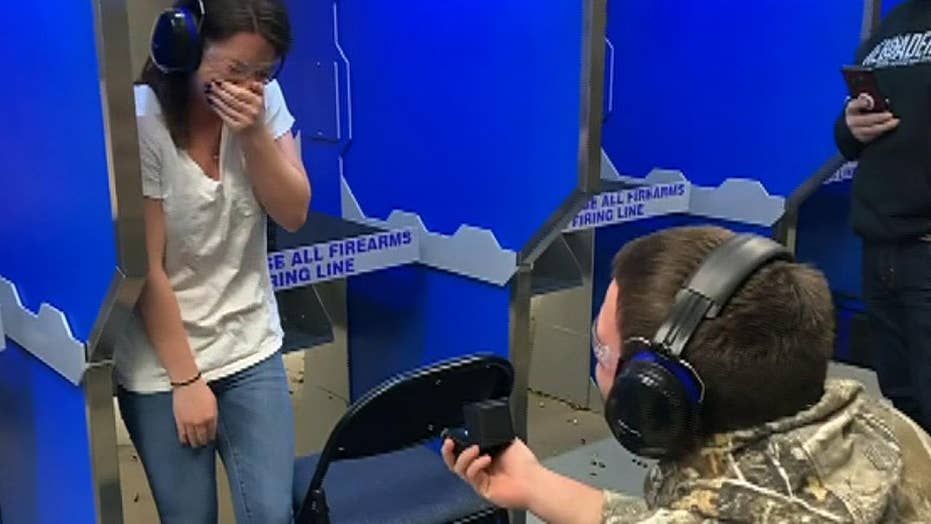 Raw video: Kara Crampton was doing some target practice when the target spun around with a marriage proposal while her now fiancé Jake Woodruff waited behind her, ring in hand. She said 'Yes'!

This bride-to-be took a shot at love – literally.

Jake Woodruff, 29, and Kara Crampton, 24, of New Jersey had been together for three years when Woodruff decided to pop the question.

Jake Woodruff and Kara Crampton got engaged while at a shooting range in New Jersey. (Courtesy of Woody Photography)

Since the pair are both hunting enthusiasts who love the outdoors, Woodruff wanted to do something unique that complimented those interests. That’s when he decided to reach out to his friend Mike Nylan and his mother, Cheryl Nylen, who owns the Reloaderz NJ shooting range in Wayne, NJ101.5 reported.

Together, the group came up with an idea for Woodruff to use the shooting range for his proposal. Cheryl helped Woodruff create a handmade “Will you marry me?” board with a “YES” and “NO” target – with the “yes” target being much larger than the “no.”

Crampton was shocked to see Woodruff down on one knee. (Courtesy of Woody Photography)

When Woodruff brought Crampton into the shooting range, which opened in December, for their planned session, the target was set up in her lane.

Once the specialized board flipped over, Crampton immediately turned around to Woodruff, who was on one knee holding the ring.

The couple plans to wed in 2020. (Courtesy of Woody Photography)

Shocked by the unique proposal, Crampton began to cry and placed the ring on her finger before returning to the seat and shooting three times at the “yes,” on the target.