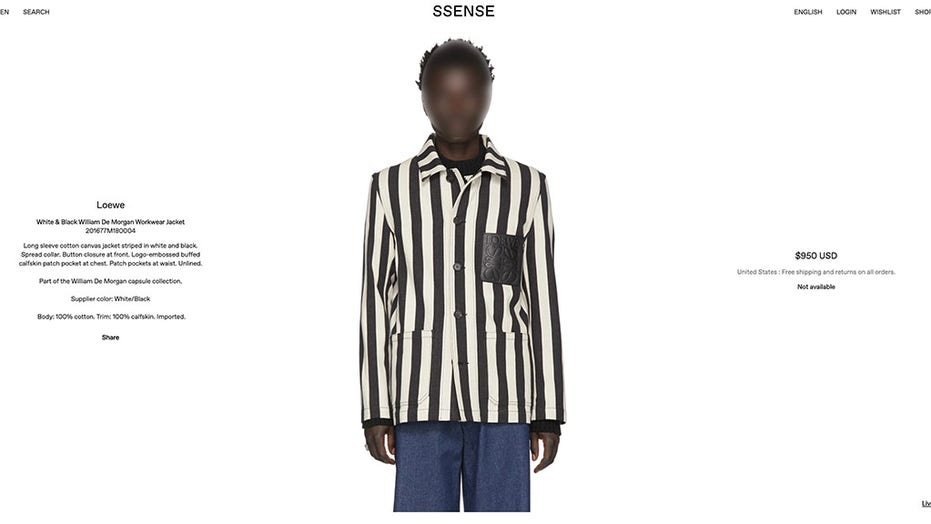 Spanish fashion brand Loewe is under fire for a recent capsule collection with one outfit that bears a striking resemblance to a concentration camp uniform.

Industry watchdog Diet Prada called out the Madrid-based luxury company on Instagram, noting a striped shirt and pants combo in the brand’s William De Morgan capsule collection was nearly identical to the outfits millions of Jews were forced to wear in death camps during World War II.

“It was brought to our attention that one of our looks featured in a magazine and part of our Arts and Crafts ceramicist William De Morgan could be misconstrued as referring to one of the most odious moments in the history of mankind,” the statement read. “It was absolutely never our intention, and we apologize to anyone who might feel we were insensitive to sacred memories. The products featured have been removed from our commercial offering.”

Before the items were pulled from the site, Loewe described the “Stripe Workwear Jacket White/Black” as a “boxy workwear-inspired jacket with pockets, crafted in durable canvas cotton, featuring LOEWE Anagram-embossed leather patch on breast panel.” The price tag was $950.

However, the shirt is still being sold at fashion e-commerce site Ssense.

Diet Prada pointed out that the black-and-white ensemble has a pattern of stripes and “prominent chest patches” that appear to look like the death camp uniforms.

“Unable to see anything but concentration camp uniforms in this $1,840 ensemble from @loewe‘s William De Morgan capsule, a collection meant to ‘capture a freedom of imagination,'” the popular social media account posted to its 1.6 million followers. “There’s not actually much left to the imagination when the resulting look is so uncannily disturbing.”

Spanish fashion brand Loewe is under fire for a recent capsule collection with one outfit that bears a striking resemblance to a concentration camp uniform. (Photo: Govt of Western Australia)

“This just baffles me. How the f – – k does an entire team of people overlook such a similarity in design to the most horrifying event of the 20th century,” one Instagram user wrote. “This is deeply upsetting,” wrote another. “Wow this is one of the poorest taste I’ve seen in a while,” a third chimed in.

As the blog pointed out, Urban Outfitters and Zara have both been called out in the past for similar outfits. Zara pulled a pair of pajamas after outrage in 2014 and UO was selling a tapestry “eerily reminiscent” of Holocaust uniforms in 2015.

“It’s fantasy — but an odd type of fantasy,” he said. “There’s something which I think, in a weird way, has a sort of wizardry about it. Kind of like an early ‘Harry Potter.’ ”

Vogue France called it “the most artistic collection of the season.”

This story was originally published by The New York Post.