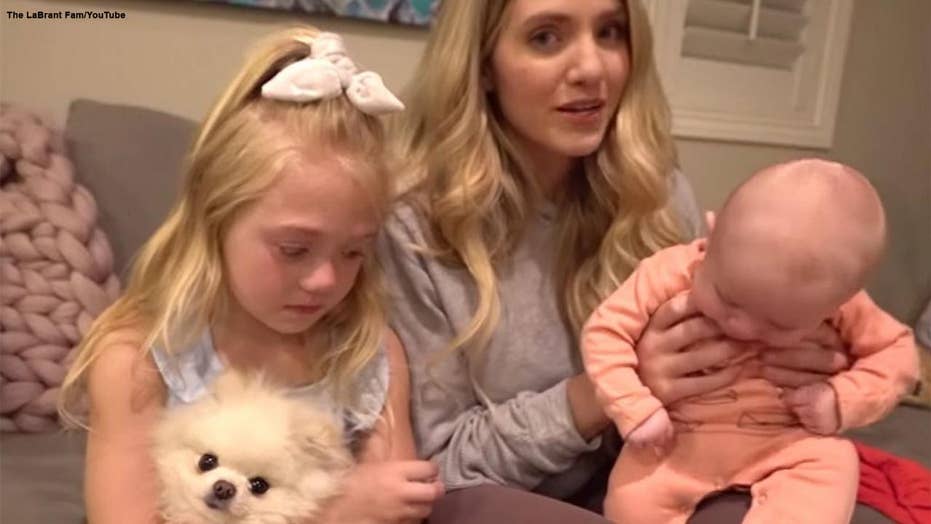 YouTube couple, Cole and Savannah LaBrant shared a controversial clip of them pranking their 6-year-old daughter for April Fools’ day, but the video quickly garnered a lot of backlash from their followers, with some calling it ‘cruel.’

A YouTube-famous couple has apologized for sending their 6-year-old daughter to tears with the April Fools’ prank that they were giving away the family dog, a stunt that has since been blasted by many on social media.

On April 1, Cole and Savannah LaBrant shared a controversial clip titled “We Have To Give Our Puppy Away... Saying Goodbye Forever” with their 8 million-plus YouTube subscribers.

In the flick, the California parents convince their daughter Everleigh that they have to give away Carl, the family’s fluffy white Pomeranian.

“Basically we are giving Carl away to someone else because we feel like we can’t take good enough care of him,” Savannah said, as the teary youngster cuddled the dog in her arms. The mom continues to list a slew of reasons why the pooch is no longer a good fit as the family pet, while Everleigh appears to believe that she will have to say goodbye to the dog forever — and doesn’t laugh when her parents tell it was just an April Fools’ trick.

“We didn't think Everleigh would be this sad about it,” the parents later captioned the now-viral YouTube clip. (iStock)

"We're keeping Carl!” Savannah exclaimed, as the girl burst out in tears. The couple's baby daughter, Posie, too, became irate.

“We didn't think Everleigh would be this sad about it,” the parents later captioned the now-viral YouTube clip.

Though the LaBrant couple later insisted that the youngster was fine just a few minutes learning that the family would not be giving Carl away, some Twitter users said that the “cruel” joke was a prank gone too far.

“At this point, I'm honestly just disgusted with Cole and Savannh,” one critic clapped.

“Yeahh that was messed up, that was not a wholesome fun joke, she was genuinely upset & they still ran with it. Cruel,” another agreed. “Wasn't even a good idea in the first place.”

“I think they're a beautiful family and one of the only YouTube Family Channels I subscribe to. However, the prank on Everleigh was over the line,” another offered. “And they should've stopped as soon as she was that visibly upset over giving her dog away.”

Fans of the YouTube stars, meanwhile, argued that it was just a joke and that the parents never intended to make Everleigh so upset.

“Y’all need to chill out on the Labrant family. It was a April fools joke and once again the media took it way too far,” one supporter said. “They did nothing wrong. Get over yourselves.”

“People are so sensitive!! Why can’t people take a joke? You clearly do not know the LaBrant family if you have something negative to say about this or their parenting style. Use your energy for more important things in the world than judging someone for an INNOCENT prank!” another chirped.

“I’m 17 and if my parents said we were giving away our dog I would cry also. It is 100% human nature to get sad over something like that. Eveleigh was fine at the end of the video and went and pranked Cole,” one exclaimed. “Cole and Savannah are great parents.”

Two days later, Cole and Savannah issued a lengthy apology for their stunt gone wrong, with a YouTube address that has since been viewed almost 900,000 times.

“We’ve never addressed something like this… we have been getting a lot more hate than we usually ever have,” Cole began in the video titled “Addressing All The Hate We've Received.”

“Like 90 percent of you guys are so sweet, and know who we are, and know that we don’t have bad intentions, and know that we're not bad parents,” his wife agreed. Savannah continued to dish that the fierce judgements from detractors bordered on being “death threats,” prompting them to respond.

“The crazy mean comments are getting to us as parents… we felt compelled to address it,” she continued, as the pair expressed their apologies for the joke gone wrong.

“It was just a bad judgement call… we are young parents, and we put all of our lives out on social media,” Cole concluded. “We’re going to make mistakes, and we hope to learn from this."