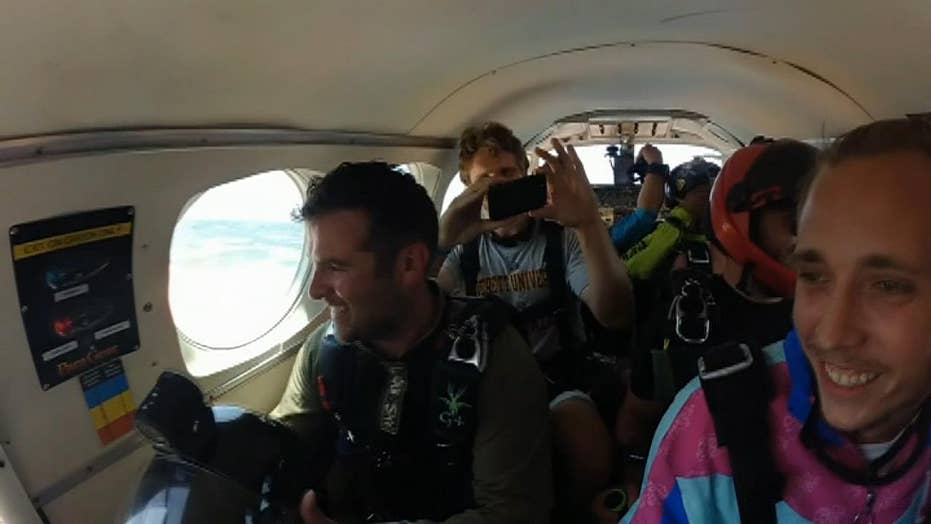 Timothy Goodwin of Oak Island, N.C., and his fiancée Angela Hewett, set up a dramatic gender reveal on Saturday when Goodwin leaped out of a plane into a cloud of pink smoke.

This North Carolina man is diving headfirst into fatherhood.

Timothy Goodwin of Oak Island, N.C., and his fiancée Angela Hewett, set up a dramatic gender reveal on Saturday when Goodwin leaped out of a plane into a cloud of pink smoke.

GROOM MAD AT SISTER FOR SCHEDULING GENDER REVEAL PARTY ON WEDDING DAY: 'NOBODY EVEN APOLOGIZED'

The stunt was set up through Skydive Coastal Carolinas, who the couple sent the sonogram to, who assembled the ground smoke to coincide with the fetus’ gender.

Goodwin was the one who wanted to do the over-the-top skydiving reveal, but he admitted to Inside Edition that at first, Hewett was not on board.

"Off the gate she was not happy about it, you know. Of course, us being pregnant, she needs me there. She's very nervous about it," Goodwin said to Inside Edition. "We went up to [Skydive Coastal Carolinas, the company Goodwin jumped with] and they showed us all the safety procedures they go through and made us a little more comfortable about it."

The couple gathered their friends and family at the landing location and Goodwin loaded into the plane. Once they were far enough up, Goodwin did a tandem jump, attached to an instructor before he landed at the reveal site.

“When we hit the ground, one of the jumpers helped me up and first thing I was looking for was [Hewett] and see how she was looking, and how excited she was. I’m glad we did it here, we couldn’t have picked a better place and a better idea for a gender reveal.” Goodwin said to WECT.

Though Goodwin said he did not have a preference as to the gender of the baby, he and Hewett are excited it’s a girl.