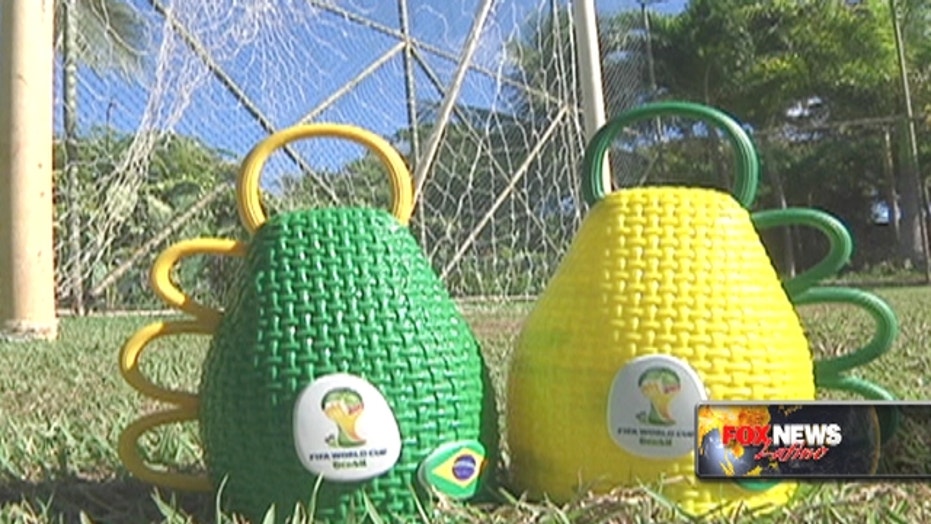 Brazil’s answer to the vuvuzela hits a sour note

For this year’s World Cup in Brazil – a country known for exporting both its soccer and music stars – the caxirola was meant to be the South American nation’s answer to South Africa’s vuvuzela.

Salvador, Brazil – Maybe more than who won or lost, the 2010 World Cup in South Africa will be remembered for one thing: The vuvuzela.

The long, plastic horn became the soundtrack for every game played in the tournament, creating a sound kind of like a swarm of angry bees buzzing around the stadiums during matches and, depending on who you asked, becoming either a beloved part of soccer or a eardrum-shattering terror to player and spectator alike.

For this year’s World Cup in Brazil – a country known for exporting both its soccer and music products – the caxirola was meant to be the South American nation’s answer to South Africa’s vuvuzela.

“The caxirola is a Brazilian percussion instrument idealized to become the means of expression for spectators at the 2014 World Cup Brazil,” the packaging on the caxirola states. “Inspired by the rhythm and musicality of Brazil, the caxirola is a type of rattle instrument, easy to use and collective.”

Resembling a pineapple with brass knuckles attached to its side, the caxirola has not become the means of expression at the World Cup it was touted as, even though it received the backing of many high-profile supporters, including Brazilian President Dilma Rousseff and soccer's governing body FIFA.

Maybe realizing it missed out on a cash cow by not horning in on the vuvuzela, FIFA wholeheartedly adopted this Brazilian rattle, labeling them in the colors of countries in the World Cup and selling them online for $14 each.

An incident, however, during a match last year between EC Bahia and EC Vitória, in which angry fans started hurling their caxirolas onto the pitch might have been the death rattle for the instrument. The Brazilian Ministry of Justice banned the caxirola from the 2013 Confederations Cup and then extended that ban to the World Cup.

The grenade-shaped shaker now joins the vuvuzela and other noisemaking devices on the list of prohibited objects inside Cup arenas and at all official FIFA events.

The ban on the caxirola is music to some people’s ears, but others – including its inventor, the Oscar-nominated musician Carlinhos Brown – bemoan the heavy-handed tactics taken against what Brown calls a “sacred instrument.”

Brown told the Wall Street Journal that he wanted to make an environmentally friendly symbol of his country's Afro-Caribbean roots. He added that while he was "a bit embarrassed" that the caxirola hurling incident occurred, especially as it involved his favorite team, Bahia, he believes that the instrument is being unfairly picked on.

Along with Brown, many spectators at the World Cup say they wouldn’t mind the caxirola being allowed into the matches – saying that it adds the atmosphere and can’t be as annoying as the incessant buzz of the vuvuzela.

Stephan Paul, an acoustical engineering professor at Brazil's Federal University of Santa Maria, went so far as to test the decibel level of a stadium packed with caxirolas compared to one packed with vuvuzelas. The verdict: The Brazilian instrument had a decibel rating of about 80 dBA (around general street noise) compared with 109 dBA (just under that of a gun shot) for the South African horn.

“I think it would have been pretty cool to see them in the stadiums and see the fans using them,” Lyman Missimer, a U.S. soccer fan from California told Fox News Latino. “It’s like Brazil's iconic game instrument.”

That was something that Brown wanted when he first set out to design the caxirola. Originally he thought others should be able to copy and produce it, and he had no intention of making money off the instrument himself.

Given the controversy over the vuvuzela – complaints about hearing loss, players not being able to communicate on the field and general confusion from television viewers – the caxirola may have fallen victim to a backlash against noisemakers.

The ban may also account for the dearth of knowledge outside of the Brazil of what the caxirola is … and a seemingly general disappointment when one finds out what it sounds like.

“I have never seen or heard of it in my entire life,” Dana Nguyen, a U.S. soccer fan told FNL while trying out a caxirola. “This does not make a statement. This is kind of like a fun thing you do at a party, but the vuvuzela that is all about ‘I’m loud, I’m proud, I’m cheering people on.’”

This sentiment, along with the ban during Cup matches has translated into a void in the use of the caxirola during game watches and other non-FIFA related Cup events. Since the tournament started, the vuvuzela and other horns have made more appearances at street festivals, bars, game watches and even airports – while the caxirola has so far remained little more than a trinket that tourists can buy at FIFA shops and at its Fan Fests.

Even so, the caxirola has scored a goal in the marketplace. World Cup marketers are branding it as one of the 10 must-have items at the tournament, and the rattle has made its way into stores from big box retailers like Wal-Mart.

“I’ll definitely buy some as a souvenir,” Missimer said. “I’m going to do a big last minute, last day shopping trip and I’m obviously going to get one of these.”