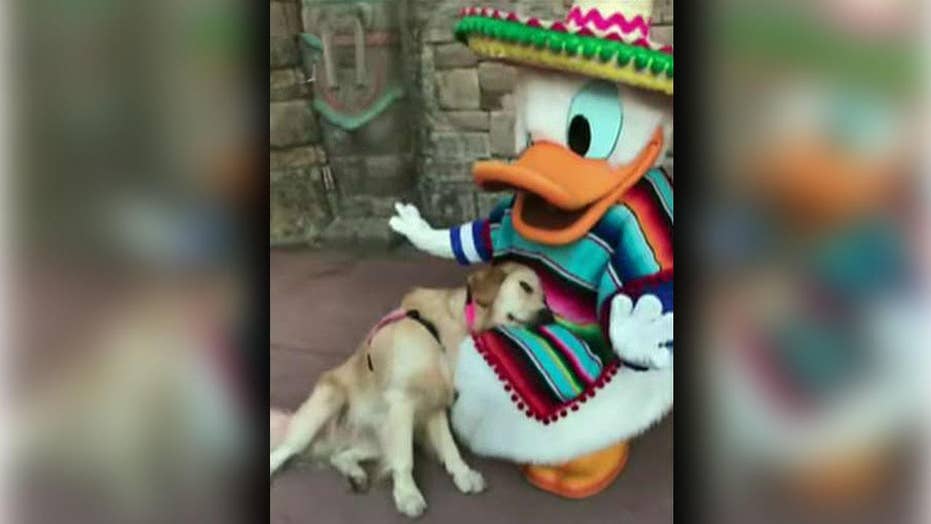 A service dog named Nala has gone viral thanks to a heartwarming video showing the animal cuddling with Donald Duck at Disney World.

Trained to help people with autism, Nala has interacted with various Disney characters in Orlando while dressed in adorable outfits. Nala's handler has shared highlights on the dog's Instagram page, @helperdognala.

In the video with Donald Duck, two-year-old Nala rested its head in the lap of the Disney character as its eyes gently closed. Donald then pretended to shed a tear with his hands before gently petting the content-looking service dog who refused to move.

Upon seeing the camera, Nala stood up with its tongue out and smiled for the camera as the Disney character petted the animal just a little while longer.

"The moment Nala walked up to meet Donald, crowds surrounded and watched in awe," the dog's handler, Megan Leigh, told the Dodo.

"Nala did not want to leave Donald at all," Leigh added. "She loves him a lot!"

Nala and Megan have made the most of their jobs, including walking around the park, riding the rides and meeting the interesting characters at Disney World.

One of those being Donald Duck.

As Nala and Donald were cuddling, a woman in the background of the video could be heard saying the dog "can stay here for the rest of the day."

Nala clearly wouldn't have minded that one bit.