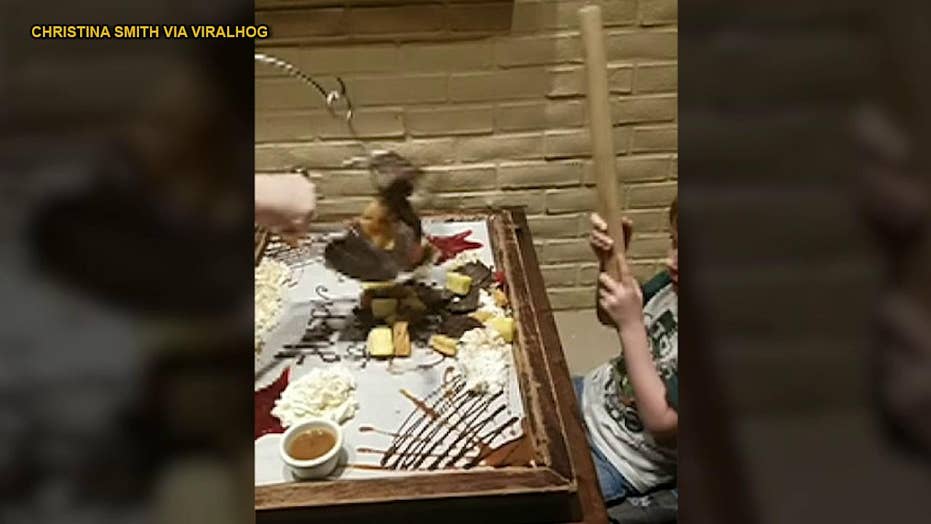 A father who simply couldn't wait for his six-year-old son to break open his chocolate birthday piñata took it upon himself to lend a helping hand. As the child casually swings at the&nbsp;piñata without causing any damage, the dad, who was sitting out of frame, suddenly punches the dessert, shattering the remnants across the table. Off-camera, the father can be heard apologizing as the video comes to an end.

That’s not how you say “Happy Birthday” to a little kid.

A seemingly impatient father apparently couldn’t wait for his son to smash his birthday piñata. After watching the small child make a few attempts on his own, the dad took things into his own hands -- literally.

Footage of the incident was captured at a restaurant in Durham, N.C., ViralHog reports. In the video, it appears that the chocolate piñata had been partially broken open prior to filming.

The boy, who was celebrating his sixth birthday, casually swings a stick at the piñata, but not hard enough to do any damage to it. As his mother calmly tells him to “really whack it,” things take a surprising turn.

Sitting out of frame, the dad suddenly punches the piñata, shattering the remnants.

As the shards of chocolate and the contents of the piñata go flying, the birthday boy gives a surprised “whoa.” Off-camera, his father can be heard apologizing.