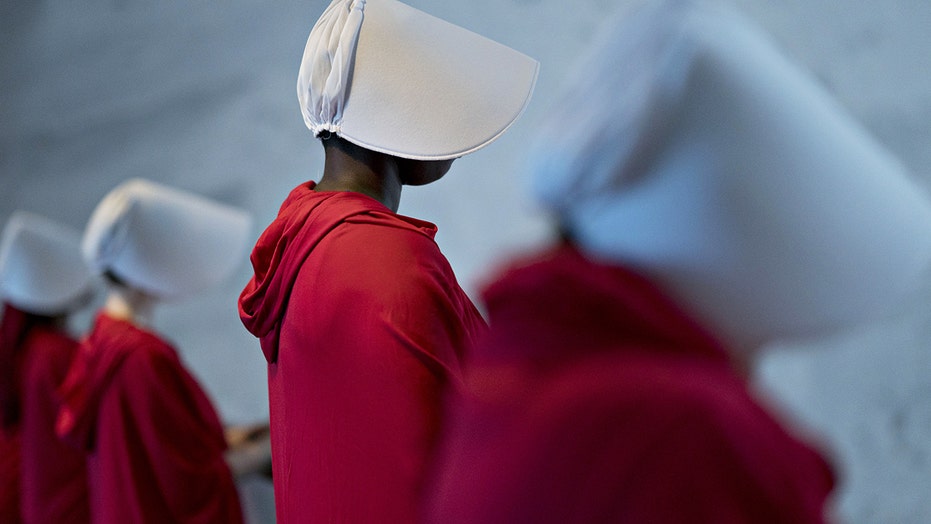 A Florida couple’s "Handmaid’s Tale"-themed pregnancy announcement has been slammed by online critics who say the provocative photo shoot goes too far.

Leah Hampton originally shared the photos of her and husband Marquis Wimberly on Facebook as both an announcement that they were expecting and a creative way to celebrate Halloween.

Weeks later, however, the images have gone viral, sparking negative comments from some who say the photos promote rape and misogyny.

Leah Hampton is seen dressed head to toe in the "Handmaid’s Tale" uniform, which is worn by the women of Gilead, the fictitious and dystopian society of the popular Hulu series and the original book.

The fertile women of Gilead, called handmaids, are treated as properties of the state and forced into sexual servitude to repopulate the world.

Many online found the couple’s theme to be in poor taste.

“I don’t think I’d want to make my husband out to be some random guy that raped me and forced me to get pregnant,” one Facebook user commented.

“I LOVE Handmaids Tale! One of the best shows I have ever seen. This photo shoot is also amazing,” another Facebook user wrote. “With that being said, I absolutely think this is an odd as [expletive] way of announcing your pregnancy.. Creative, very! In a grotesque and almost shameful way.”

Another person wrote, “Is anyone gonna tell her that she's implying her husband raped her?”

Some commenters, however, came to the couple’s defense.

“This was in the spirit of Halloween. Pregnant women will put fake blood, along with a fake knife adhered onto their stomachs, and people don’t say anything about it,” one Facebook user said.

“Why? Because it’s not real. Just like how the show is cautionary, doesn’t depict the couple’s actual relationship, and obviously the baby making was consensual.”

“Everyone mad in the comments.. you know it’s a tv show right? As in this is fake?” another Facebook commenter posted. “Their pictures are just like the TV show.. Staged. Stop the fake outrage.”

Despite the negative comments, it appears the couple stood by their decision.

“Some people have been so viscerally moved by the "Handmaid’s Tale" that our photoshoot has upset their sensitivities. They care so deeply and passionately about women that they have resorted to harassing a pregnant woman on Facebook,” Leah Hampton posted.

“Folks, we are UNMOVED … Not everyone will like or agree with our theme. We don’t give a f--k.”