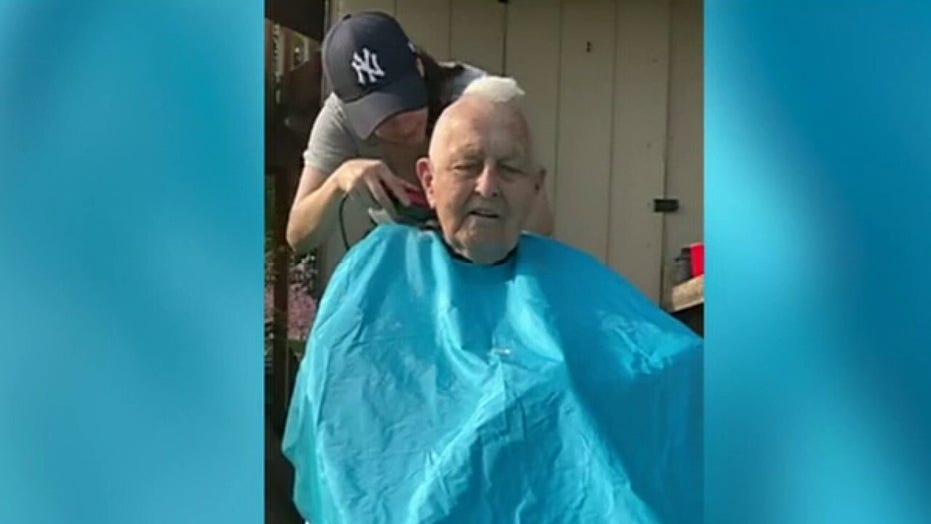 His granddaughter Lydia Arshadi talks to Martha MacCallum about giving him the haircut.

One 96-year-old World War II veteran is bravely facing the coronavirus pandemic with a fierce mohawk haircut, inspired by the same style he and his fellow soldiers sported when they stormed the beaches of Normandy, France in 1944.

Guy Whidden, a U.S. Army vet who served as a paratrooper in the 101st Airborne Division, recently shaved his white hair in a tribute to his military roots, and as a battle cry for courage during the global COVID-19 outbreak.

With a little help from his granddaughter Lydia Arshadi, the Maryland man chopped his hair into a mohawk earlier this month. A video of Whidden's haircut has since gone viral, sparking the patriotic #MohawkChallenge.

“I would like to have my hair cut as a mohawk that we cut for D-Day in France, and also in Holland, as a tribute to all the fallen airborne guys up in the skies,”’ Whidden explained in the uplifting clip, which has since been viewed over 28,000 times on YouTube. “I would like to thank and challenge all of you, past, present and future Airborne people. This is something we can do during this [pandemic].

“And I’m not doing it because I don’t have any hair on either side of my head. I’ve always had a big head of hair!” he joked. “Let’s have some fun with it!”

After Arshadi finished the trim, Whidden was quite pleased with his tough new ‘do.

On Wednesday night, Arshadi told host Martha MacCallum on “The Story” that her family is “is completely blown away with the amount of support we've received around the globe” for her grandfather’s mohawk mission.

“Wow!” Military guys from all around the globe have been sending over photos of their mohawks after we started the #MohawkChallenge as a tribute to the fallen paratroopers,” Arshadi wrote on Facebook, sharing photos of proud participants. “You all have made Grandpa SO happy and thankful!”

Over 75 years ago, in 1944, a 20-year-old Whidden got his first mohawk the day before jumping out of the second American plane at the critical invasion in Normandy, the New York Post reports.

Now, the proud American hopes to channel and inspire that same kind of courage amid an uncertain future as the novel coronavirus sweeps the globe.

See the video above for Arshadi’s full interview on “The Story” to learn more about her grandfather’s incredible life and times, including the moment he believes “divine intervention” prevented him from dying at the hands of Nazi lieutenant in WWII.