Christmas tree have walnut-shaped masses on it? Don't bring them inside

A viral Facebook post warns if you see walnut-shaped masses on your Christmas tree, don't bring it inside, at is may be home to nearly 400 praying mantis eggs that have yet to hatch.

Some would argue there’s nothing better than a live, freshly cut Christmas tree to bring joy and holiday spirit to your home ahead of the jolliest day of the year. The smell of fresh pine, the fun of picking out the perfect tree with your family and the colorful decorations — but there is a potential downside: insects.

These holiday staples can harbor certain insects such as mites and bark beetles.

In fact, “several hundred baby insects or spiders can be on a single tree,” the Iowa State University Extension and Outreach warns. Gardening company Safer Brand reported in 2017 that as many as 25,000 bugs (many of which are microscopic) can be found on a single tree.

But there's no need to fret.

"These 'accidental invader’ insect and spider pests are harmless and should not be viewed as a disruption to the festivities,” the university added. The North Carolina State Extension also noted that it’s relatively rare to find pests on a tree in the first place.

But with Christmas Day just around the corner, it's better to be safe than sorry. Read on for a look at some of the critters that could possibly enter your home — and what to do if you find them.

Aphids are insects that “use their piercing, sucking mouthparts to feed on plant sap,” the University of Kentucky’s Department of Entomology says online. These critters are typically found in colonies and have the ability to fly.

These creatures are often found on Christmas trees, and a certain type — Cinara aphids — are sometimes mistaken for spiders or ticks. Another, balsam twig aphid, can appear on “true firs” the Pennsylvania Department of Agriculture, Bureau of Plant Industry states online.

"They tend to move off of the tree once it starts to dry out. Some years they are more common than others. This was a very wet fall, and so I don't think we're seeing many — if any — problems with aphids," Jill Sidebottom with the NC State Extension told Fox News.

Also, they aren’t known to feed on houseplants, according to the Pennsylvania Department of Agriculture, Bureau of Plant Industry.

While these eight-legged creatures may scare some, the ones typically found on Christmas trees shouldn’t cause homeowners to worry.

In fact, “spiders found on Christmas trees are predators of insects and are not dangerous to people or pets. They are either overwintering species that have become active or spiderlings that have hatched after being exposed to warm temperatures,” the Pennsylvania Department of Agriculture, Bureau of Plant Industry states.

These spiders may leave the tree and form webs nearby. But these can be easily removed with a vacuum cleaner, the bureau states, noting the spiders brought in with the tree “are not [an] indoor species and will die in a short time because of their new, unsuitable environment.” 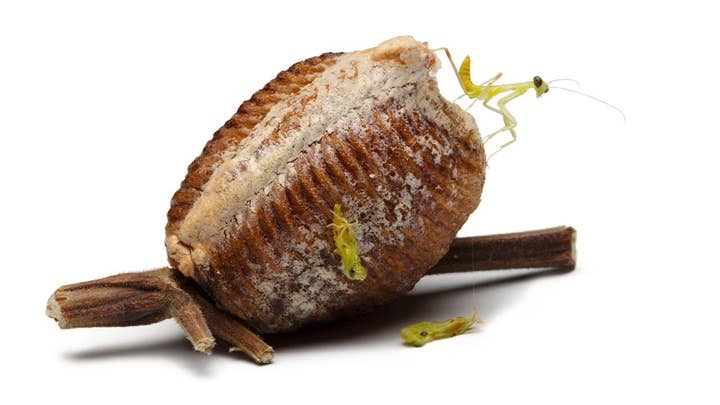 Beware of the light brown, walnut-shaped shaped masses that can occasionally be found within the limbs of a freshly cut tree. These masses are likely a  praying mantis egg sac, which can contain up to 400 unhatched eggs, according to Safer Brands.

“These eggs will begin to hatch after being indoors for several weeks. When this happens, numerous tiny mantids swarm over the tree seeking food. Since they are cannibalistic they will eat each other if no other food is available,” the  Pennsylvania Department of Agriculture, Bureau of Plant Industry explained.

DOES YOUR CHRISTMAS TREE HAVE WALNUT-SHAPED MASSES? 'DON'T BRING THEM INSIDE,' VIRAL POST WARNS

Cut off the twig containing the mass and place it outside on an “evergreen shrub or tree outdoors,” the bureau recommends, explaining these eggs will hatch in the spring when the mantises have better access to a food source.

"They are large, and most retailers know to look for them and remove them. Inspecting a tree for the egg mass is the best way to reduce the likelihood that they would hatch out in the home," Sidebottom said.

Mites can sometimes be found on Christmas trees, but they will typically remain there and go unnoticed, according to the Pennsylvania Department of Agriculture, Bureau of Plant Industry.

“Several species of bird parasites may be found in nesting material after the birds have abandoned the nest. Although these mites are generally not present on the trees in winter, bird nests on the tree should be removed to assure that no mites are brought into the home,” the bureau adds.

In fact, "mites seldom move off of cut trees. They can sometimes be found on trees, but they are typically treated for by the grower. I only remember one growing season when it was exceptionally warm and dry in the fall that they were a problem," Sidebottom said.

Dormant bark beetles may find the warmth of your home pleasing, causing these “minute” brown and black creatures to wake and bore “into the trunk, creating small holes and very fine sawdust,” the Pennsylvania Department of Agriculture, Bureau of Plant Industry also states.

But no need to worry: These beetles won’t get a taste for the wood furniture inside your home, which is “too dry” from them, according to the bureau.

How should I get rid of them?

When picking out a tree, be sure to check it for egg cases or any other critters that might be lurking on the branches or near the trunk.

After bringing the tree home, rid it of any insects and loose pine needles by shaking it before bringing it inside. Another option is to wash the tree with a garden hose, Sidebottom said.

"For any of the pests, you can wash the tree off with a water hose before bringing it in the home. Allow the tree the dry off overnight before bringing. Pests can be swept up, being careful not to squash them on carpets, fabrics and things as some can leave a stain," she said.

"If a person wants to treat with an insecticide, I typically recommend insecticidal soap which is organic and can be found premixed in many hardware/home improvement stores," she added.

Don't spray the tree with aerosol pesticides, as these products are typically flammable, Safer Brands warns.