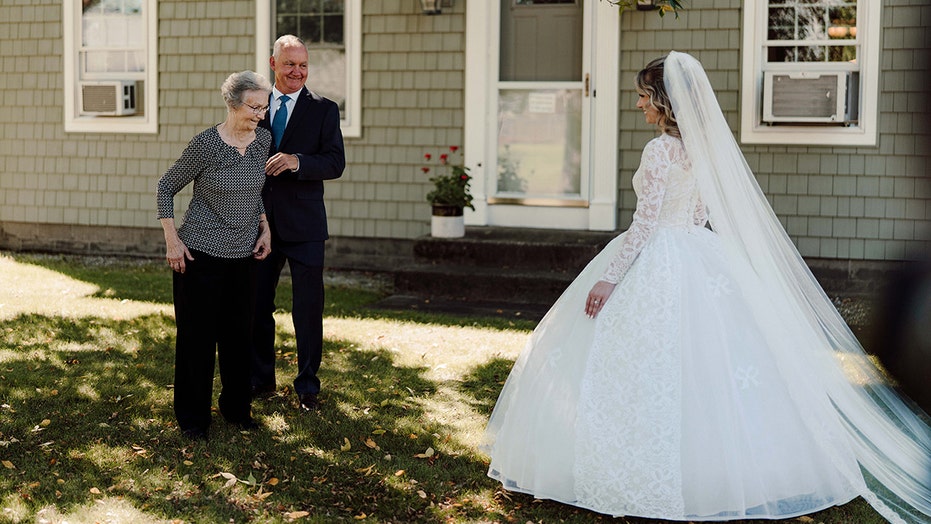 When Allie Livingwater was married earlier this year, she had a very special "something old."

Livingwater, 23, from Turners Falls, Massachusetts, wore her grandmother’s wedding dress at her marriage ceremony on Sept. 25.

Anne Cooke, 88, wed on June 3, 1961. She wore a long-sleeved wedding dress with a hoop skirt that she bought from the still-operational Aliber’s Bridal in Greenfield, Massachusetts, according to Livingwater.

BRIDE SAYS YOU SHOULD KEEP YOUR WEDDING DRESS SECRET, HERE’S WHY

Livingwater told Fox News she decided she wanted to wear her grandmother’s "timeless" gown about five years ago. Livingwater said that was when she discovered the garment stored in a "dusty bag" in the basement.

Livingwater said she brought the dress upstairs to try it on and it fit.

Allie Livingwater wore her grandmother’s wedding dress when she was married on Sept. 25. (@keptyaphotography)

"It was my dream style, basically," Livingwater said. "It had the long sleeves, ballgown. So it was really everything that I had been looking for."

"I just thought that it was really elegant," she added. "So I always had it in the back of my mind, like, ‘Oh, when I get married someday, I’m going to wear that.’"

CALIFORNIA COUPLE GETS MARRIED AT ‘MOST BEAUTIFUL’ TACO BELL: ‘IT WAS THE BEST OF BOTH WORLDS’

Last year, when Livingwater got engaged to her now-husband Timmy, 27, she went back to her grandmother's to try the dress on again.

"It fit like a glove," Livingwater said. "It was perfect."

"Everybody says how timeless it looks," Livingwater said, adding: "She picked out the perfect dress."

Livingwater said that the dress didn’t need to be altered, though it did need to be cleaned and have some of the lace restored. Livingwater also got a hoop skirt to go under the dress, just like Cooke wore her dress 60 years before, which helped show off the detailing and bows on the ballgown.

On her wedding day, Livingwater did a first look with her dad and grandmother

"She couldn’t take her eyes off of the dress and me and she was tearing up," Livingwater said. "She was just really happy."

Cooke is pictured on her wedding day, June 3, 1961. (Courtesy of Allie Livingwater)

"It was so special, just because she was like a second mother to me growing up," Livingwater added.

Of course, wearing her grandmother’s dress – the dress of "one of the most special people" in her life – was a highlight for Livingwater.

"The fact that she let me wear her wedding dress on the most important day of my life means everything to me," Livingwater said. "Her wearing the dress paved the way for her successful marriage. And then...me wearing her dress so that I can marry the man of my dreams, it kind of tied the day together in every perfect way possible."