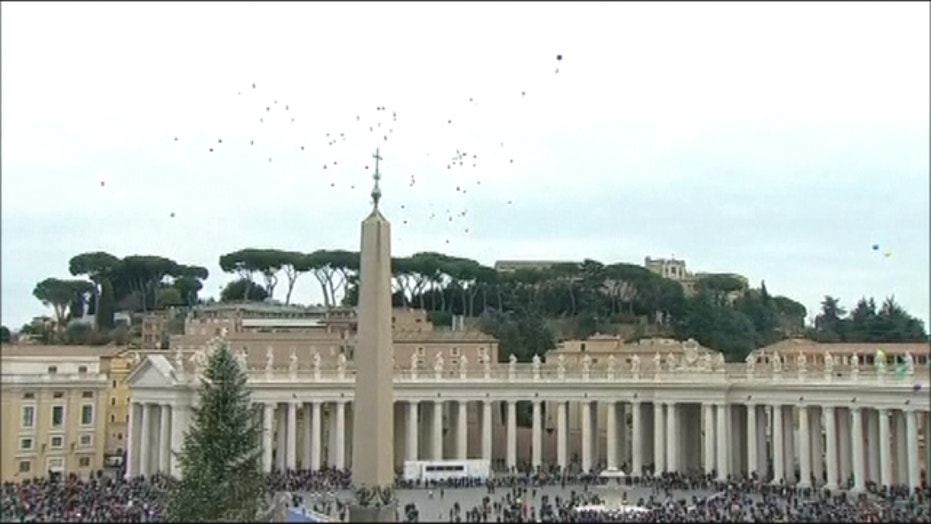 Balloons, not doves, were released as a gesture of peace Sunday in St. Peter's Square, a year after an attack by a seagull and a crow on the symbolic birds sparked protests by animal protection groups.

Balloons, not doves, were released as a gesture of peace Sunday in St. Peter's Square, a year after an attack by a seagull and a crow on the symbolic birds sparked protests by animal protection groups.

For years, children flanking the pope at a window of the papal studio overlooking the square, set free a pair of doves on the last Sunday in January. The Catholic Church traditionally dedicates January to peace themes.

Last year, the feel-good practice became a public relations disaster. After the children with Pope Francis tossed a pair of doves from the window, first a seagull and then a crow swept down and attacked the doves. Those doves' ultimate fate was unknown.

Advocates for animals demanding an end to dove releases swiftly appealed to Francis, the first pontiff to adopt the name of Francis of Assisi, the saint famed for his love for birds and other creatures of the wild.

"Here's the balloons that mean, 'peace,'" said Francis when children in the square let go of their balloons.

Gulls nest atop the colonnade of St. Peter's Square, not far from the Tiber River, and scavenge for garbage. One animal advocacy group likened freeing doves in Rome to issuing a death sentence.

Another saint, Pope John Paul II, began the dove release tradition to draw attention to the need to work for peace in the world. Since then, children have been invited to join pontiffs at the window to release a pair of doves.

The Vatican didn't mention last year's flap when it said in a statement Sunday that children would release balloons, including a hot-air balloon containing messages of peace. One of the children at the window read a speech about peace.